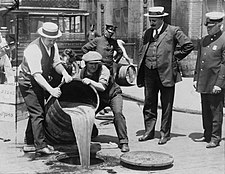 Pouring confiscated liquor into the sewers in New York.

Prohibition, as a sort of term of art, refers to the prohibiting of alcohol and psychoactive drugs. It is generally a political stance taken by people who get more out of their favorite vices when they're forbidden...or whose favorite vice is denying others the right to their vices.

In a historical context, Prohibition refers to the period of time in between 1919 and 1933 when it was generally illegal in the United States to produce, possess, transport, purchase, or consume any alcoholic beverage.

Canada also had a period of prohibition, but their laws were enacted at the provincial level, so the years vary: Ontario from 1916 to 1927; Alberta from 1916 to 1924; Quebec (where prohibition was highly unpopular) in 1919 only but it was quickly repealed; Prince Edward Island from 1900 to 1948. PEI was the last Canadian province to repeal prohibition.

The United States had a Prohibition Party since 1869, and in fact, Republicans castigated Democrats as the party of "rum, Romanism, and rebellion." The Anti-Saloon League, formed in 1893, mobilized a large number of churches including the Catholic Church under their slogan of "The Church in action against the saloon." With renewed vigor, the prohibitionist movement was able to get many local "dry" laws passed. Their big prize was federal prohibition. The 18th Amendment

was passed by the houses of Congress in a "perfect storm" during December 1917 and ratified by the required 35 states in short order. The prohibition movement had long been associated with anti-immigrant sentiment that asserted American Anglo-Protestant virtue and it was at its all-time high, particularly against German immigrants[1]. Prohibitionist sentiments were also more popular among women than among men and the widespread gains in women's suffrage in the years leading up to the war helped get the prohibitionist movement over the electoral hump at the state and local levels. [2]

Many people who supported the 18th amendment did so with the understanding that the "intoxicating liquors" it banned would not include undistilled alcohol such as wine or beer. However, the Volstead Act

that Congress passed to enforce the 18th amendment did not make this distinction and banned all alcohol. In this, one can see the dangers of a moderate movement allowing its more extremist members to get out of control; most Prohibitionists had no idea how the Volstead Act would be written until the fanatic it was named after actually got it passed. Once the wave of prohibitionist hysteria subsided and the new law came into effect, the unpopularity of prohibition expressed itself in the explosive growth of underground alcohol production and smuggling and the widely disseminated code of figurative winks and nudges for those who sought to obtain alcohol. "Speakeasy" underground drinking establishments proliferated. It was an open secret that the industry was patronized by solid citizens who would never publicly speak out against prohibition, and that payoffs from the industry were rampant among police forces and local governments. Local law enforcement efforts against the alcohol industry took on an Opera Buffa quality as it became obvious that most were for appearances only. Flouting prohibition became semi-mainstream. The Laurel and Hardy comedy Blotto

illustrated the public attitude that prohibition was not to be taken seriously.

The natural consequence of this policy was that organized crime rapidly increased in order to meet the American demand for black market booze. Since the Italian underworld (the Mafia in New York and The Outfit in Chicago) now had an extremely lucrative racket they became very rich and powerful and the crime rate skyrocketed. The underground environment favored brewing and smuggling distilled spirits since they were easier to conceal than beer and wine. The most serious enforcement efforts against the underground industry were led by the US Treasury Department. By the early 1930s, it was clear that prohibition wasn't working and the 18th Amendment was rescinded with the 21st Amendment. Alcohol was to be strictly regulated by the Bureau of Alcohol, Tobacco and Firearms as well as at State and local levels. Legal beer was strictly defined in 1934 as having an alcohol content of 3.2%. Much of the industry continued to operate outside of the law.

Incidence of alcohol abuse and alcohol-related deaths increased during Prohibition.[3] Critics of the War on Drugs often point to prohibition as one example of why the legislation of morality does not work. On the other hand, at least at the beginning people drank way less on average than they did before—indeed, Americans previously averaged almost 6 drinks per day. The average level of drinking then sharply increased, and in the years immediately afterwards (exactly how long is still disputed) went back up to pre-Prohibition levels, although distilled spirits were slightly less of a factor even afterwards.[4][5] The level of cirrhosis, which is usually alcohol related, also dropped to 1/3 of what it had been before Prohibition.[6]

For Constitutional historians, it is interesting to note that the amendment authorizing Congress to engage in Prohibition (the 18th) is the only amendment to date to have been subsequently repealed (the 21st). Considering the extreme difficulty in amending the US Constitution, getting both of these passed in such a time frame is rather remarkable.

Despite Prohibition's catastrophic failure at solving the problem of alcohol abuse and its related social ills, there remain some diehards in what's left of the Prohibition Party who still think that it was a good idea.

The roles of racism and xenophobia[edit] 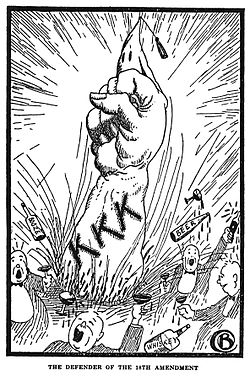 The KKK brags about its support for the Eighteenth Amendment.

It's pretty well established that the origins of drug prohibition in the United States are intertwined with racial mistrust, and with a sense that American Anglo-Protestant culture was under threat from Catholic and non English-speaking immigrants from the mid 19th Century on. The Know-nothing Party railed against Irish and German immigrants as whiskey and beer swillers. Smokable opium was used almost exclusively by Chinese immigrant workers who started showing up in the latter half of the century, and was the first target of drug prohibition. Anti-Catholicism, and anti-immigrant sentiment in general played a large role in advocacy for Prohibition. As successive waves of immigrants increasingly came from countries in Southern or Eastern Europe, promoting Prohibition proved a convenient way for Nativist bigots to demonize these new arrivals they feared and hated.[2]

A similar component fueled anti-alcohol sentiment at the opening of the 20th century. Under the Anti Saloon League, many organizations united in support of Prohibition, although for differing reasons. Among such constituents, ironically, were both the Ku Klux Klan and National Association for the Advancement of Colored People (NAACP). Furthermore, following the 1913 income tax amendment and United States entry into World War I, anti-German demonization associated beer and breweries with both German-American immigrants and treason.[2] The biggest opponents of prohibition were beer breweries, who joined together to form the Brewers Association. Almost to a man, these breweries were owned and operated by German-Americans whose primary customers were also Americans of German descent. A prohibition on alcohol, some felt, was another way of excluding "the hun" from American life.

In the Old South, the KKK often organized vigilante bands to enforce prohibition laws, heavily targeting those of Italian or Jewish heritage under the guise of stamping out bootleggers. [7]

Blacks were also targets of prohibitionist sentiment. The Anti-Saloon League, the most politically-powerful proponents of prohibition, campaigned in the South by playing up fears of black saloon-goers with "[...] a bottle of whiskey in one hand and a ballot in the other."[8][9]

Marijuana, cocaine, and heroin were either unnoticed or accepted until their sociological context changed after the turn of the 20th Century. Marijuana was popular among cowboys in the southwest, many of whom were either black or Hispanic. Its visibility increased with urban migration of blacks, becoming part of the jazz subculture and leading to the "reefer madness" panic of the 1930s. Heroin was originally derived from opium by the Bayer Company as a remedy for respiratory ailments. Its side effects led Bayer to develop another product for that purpose, but it remained a commercial product with brand names sold as a sedative and painkiller. It became popular among Jews, becoming associated with a subculture seen as un-American. Cocaine was used as a stimulant, in commercially available kits with syringes, in bulk, and as an additive in commercial products such as Coca-Cola. Rumors started to circulate of blacks snorting cocaine and engaging in all sorts of deviant behavior including rape, leading to a push to restrict it. After the Harrison Narcotic Tax Act of 1914 it was still accepted as a party drug in Hollywood, celebrated with the "cocaine comedy" genre such as the Douglas Fairbanks character Coke Ennyday. With the efforts of the good Christian Will Hayes to clean up the image of Hollywood in the aftermath of the Fatty Arbuckle trial, cocaine became an easy target as a symbol of Hollywood's immoral and un-Christian (largely Jewish) influences.

Exemptions in the United States during alcohol prohibition[edit] 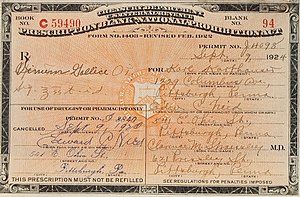 During the Prohibition era, it was not entirely impossible to obtain alcohol legally. The Volstead Act contained a few loopholes:

Note that while home winemaking in small quantities was legal, home beermaking was not.[note 1] This, again, stemmed in part out of a distrust of German-Americans, who controlled the majority of U.S. beer breweries at the time Prohibition went into effect.

Near the end of the prohibition era, Congress relented and allowed the sale of beer with an alcohol content of 3.2% or less. The spirit (pardon the pun) of this law has carried forward into the statutes of many states that exist to this day. In many states and counties throughout the U.S., "3.2 beer" is the only kind of beer allowed to be sold in grocery stores or served in restaurants. (Even in Utah.) 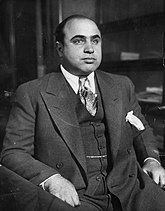 The primary benefactor of prohibition.

Believe it or not, Prohibition is cited as a source to why NASCAR proliferated in the States.[12] Yep, them mountain boys needed some fast cars to outrun the revenooers. And while you gots a fast car, why not get together with the other boys with fast cars ever so often to find out what's what?

The failure of Prohibition was also a cause of the collapse of the first wave of feminism. The movement for women's suffrage was entwined with prohibitionists, due largely to overlapping membership among organizations like the Woman's Christian Temperance Union. Intellectuals of the time such as H. L. Mencken saw suffragism and prohibition as two sides of the same coin, with women the defenders of Victorian morality out to tame and emasculate men. As a result, feminist movements collapsed at least until the entry of many women into the workplace as a result of World War II.[13]

The organized crime cartels Prohibition helped create diversified into loan sharking, prostitution, gambling, and protection. This money would be used to bribe officials to look the other way and put into legal businesses as a way to make them fronts for the illegal activities. After the conviction of Al Capone for tax evasion, these business served another purpose...as a way to report illegal income without admitting that it was illegal.[note 2] It has been joked that Nevada should have a statue to Bugsy Siegel because he was instrumental to the establishment of the modern casino and he only went into that because Prohibition had been repealed.

Ironically, some of the crime bosses of the Prohibition era had their own prohibition against getting involved in drug trafficking (not for any moral reasons but because they felt it would create too many freelancers that couldn't be "convinced" to work for them or be eliminated.) Needless to say that worked about as well as Prohibition had and many of these old bosses died of lead poisoning or got one-way rides.