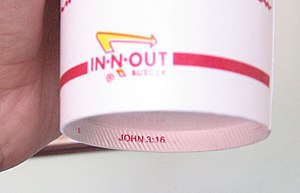 The article isn't quite about Christianity in fast food.
Not to be confused with cafeteria Christianity.

Fast-food Christianity is a snarl word which some Christians use to describe what they see as "consumer-oriented" types of Christianity that demand little from congregations.

Churches targeted as embracing a "fast food" approach are criticized for having proceedings that are supposedly presented as entertainment first and worship services second. Music is seen as pleasant and sermons are supposedly short, allegedly focused on "happy" topics like love and peace rather than serious topics which demand that worshipers actually consider difficult ideas, like personal sin.[note 1]

On the plus side, Christian groups labeled as "fast food" are usually unlikely to cause harm in the same ways that fundamentalist Christianity does, such as:

Critics say these types of Christianity are like fast food because they both taste or feel good and come with a toy or prize, but do not go very far in providing actual (physical or spiritual) sustenance. Critics feel that modern society overall wants easy rewards and that fast-food Christianity is part of this trend.[note 2] Critics fear fast-food Christianity emphasizes what the congregation likes rather than what they need for salvation. More traditional Christians might see fast-food Christians as being let off easy when they sin, especially when those sins are of the fleshly variety, such as sloth, gluttony, and fornication.

Christians who disagree with the way some other denomination does things may label those others fast-food Christians.