when Scots get skimpy with clothing.

The No True Scotsman (NTS) fallacy is a logical fallacy that occurs when a debater defends the generalization of a group by excluding counter-examples from it. For example, it is common to argue that "all members of [my religion] are fundamentally good", and then to discard all bad individuals as "not true [my-religion]-people". This can occur in two ways:

One can think of NTS as a form of inverted cherry picking, where instead of selecting favourable examples, one rejects unfavourable ones. The NTS fallacy paves the path to other logical fallacies, such as letting the "best" member of a group represent it. Thanks to these remarkable qualities, the NTS fallacy has proved a vital tool in the promotion of denialism.

In short: different sides in an argument should agree on a definition and stick to it...

The coining of the term is attributed to professor Antony Flew,[5] who gave an example of a Scotsman who, in his 1975 book Thinking About Thinking, wrote;[6]

Thus, when McDonald is confronted with evidence of a Scotsman doing similar acts, his response is that "no true Scotsman would do such a thing". This denies membership in the group "Scotsman" to the criminal on the basis that the commission of a heinous crime is evidence for him not having been a Scotsman (or at least a "true" Scotsman) in the first place.

This reasoning is clearly fallacious, as there exists no premise in the definition of "Scotsman" which makes such acts impossible.


In practice, application of the NTS fallacy is far more subtle than this, but the line of thinking always boils down to a denialistic attitude towards counterexamples.

When used in the past tense, NTS can also be used to retroactively disqualify group membership based on future wrongdoing. In this scenario, the axiom becomes "having done something bad just proves how you never really were a member of this group in the first place", a statement as comfortably shallow and devoid of meaning as answering a question regarding which sports team you're rooting for in a game as "the team that wins".

NTS is a fuzzily-defined fallacy, because the nature of "groups" themselves is fuzzy. It's hard to definitively say where one group ends and another begins (think Catholics versus Protestants: how many Catholic traditions does one have to follow to be Catholic?). Thus, there are some notable exceptions to NTS.

Noteworthy is that the fallacy does not occur if there is a clear and well understood definition of what membership in a group requires, and it is that definition which is broken (e.g., "no honest man would lie" or "no theist can be an atheist" and so on). Thus, the NTS fallacy only occurs if the group is later redefined for no valid reason.

With respect to religion, the fallacy is well used, often even overused. Religious apologists will repeatedly try to use NTS to distance themselves from more extreme or fundamentalist groups (and vice versa), but this does not prevent such extremists from actually being religious — they themselves would certainly argue otherwise. Moderate Muslim leaders, for example, are well known for declaring Islamic extremists as "not true Muslims" as Islam is a "Religion of Peace".

Similarly, moderate Christians, such as those in Europe, are sometimes aghast when viewing their fundamentalist counterparts in the United States, immediately declaring them "not True Christians™", even though they believe in the same God and get their belief system from the same book. Many of these statements claiming that the extremists are not true believers are often used as a reaction against Guilt by Association. The NTS fallacy likewise occurs when believers attribute any and all good fortune to divine intervention on their behalf, yet insist that the same can never be true when things go awry.

The NTS fallacy can also run the other way when it comes to extremism. Extremists will make a religious statement, and when someone points out that there are many believers who don't believe the extremist's viewpoint, the moderates are deemed not to be true believers (i.e., Christians who support gay marriage or accept evolution as fact are not "real Christians" or Muslims who support women's rights are not "real Muslims"). Modern pagans do it all the time, perhaps even more than other religions, due to the fact that there is no agreed-on orthodoxy for the whole group, with some well-established practices in one setting being considered unpalatable in others. Silver Ravenwolf, one of the best-selling "leaders" of neopagans, has done this with multiple ancient, well-established practices.

It's a tricky business, as being a member of a religious group, to the minds of those involved, encompasses adhering to a certain standard of behavior. For example, charity can certainly be called an essentially Christian ethic, considering the emphasis that Jesus placed on it. The man himself would most definitely disavow the greedy and "What's mine is mine" mindset of many right-wingers who call themselves Christians. However, strictly speaking, a Christian is defined as "one who professes belief in the teachings of Jesus Christ"; there's no rule saying they have to do it right.

Atheists can also be guilty of the fallacy, such as someone hypothetically exclaiming that "true atheists" don't believe in ghosts or UFOs when such disbelief actually has nothing to do with atheism.

Language-users can use NTS to uphold positive, neutral, or negative stereotypes by portraying people who do not conform to them as exceptions. For example note the claim that feminists, being "well-educated and having strong opinions about gender issues", do not speak for "typical" women. NTS also commonly occurs as a form of name-calling (e.g. "Real men eat meat", "Real Americans don't question the existence of God", "Real artists don't use a computer", etc.)

Phrases such as "un-American", "un-Christian", "un-Islamic" or "inhuman" are widely used in politics and media to distance oneself from a subject, defining them as outside the bounds of what the speaker regards as truly "American", "Christian", "Muslim" or "human" behaviour. Such phrases strongly suggest NTS is in use, since the use, for example of "un-American" to describe specific political activities by some American citizens implies some special definition of "American" beyond mere nationality.

In recent years with the advent of the Tea Party Movement circa 2009, the label "Republican in name only" (RINO) has come into more prominence from people who want to disassociate from certain fellow-supporters of the Grand Old Party. The trouble with this phrase is that it is not useful at all - its use tends to be a replacement for "Republican I don't agree with, despite being in the same party". People who use this phrase tend to throw it even if there is only one issue the supposed RINO doesn't toe the party line on, such as being pro-choice. The term of art Cuckservative has similarly been used for otherwise conservative persons who believe that racial and gender inequality persist in the United States. This also exists on the other side of the Great U.S. Political Divide as well, but having terms that identify subgroups like Blue Dog Democrat is far less damning and more useful.

Another recent example that has become common on social media is when someone posits a somewhat politically conservative ill considered idea, is called a boomer, but turns out to be younger, resulting in the reply "boomer is a mindset". However, this fallacy is not limited to the right side of politics: for instance, a common meme among radical leftists is that the Soviet Union wasn't "a real attempt to achieve socialism", even though it was clearly the objective of the state to own the means of production, just as is dictated by Marx. You can decry the crimes of the Soviet Union (like the Holodomor) without resorting to fallacies to deny that it was actually a socialist regime.

The No True Scotsman fallacy may be used to dismiss autistic advocates who dare to point out that groups like Autism Speaks are doing more harm than good. When they say "I'm autistic and X is harmful to us," detractors reply "You're not autistic, because..."[9]

Then, the anti-autism advocates claim that the person is simply "too high-functioning" to understand the horrible constant suffering of the "low-functioning" people, and thus their entire argument is invalid. This might lead to an autistic person feeling pressured to describe their impairments in detail to prove their autism, even though this could harm the autistic person socially or professionally.[10]

Never mind the fact that you don't have to be autistic at all to recognize that a lot of so-called "autism advocacy" and "autism organizations" are downright horrible to autistic people.

And if an autistic person with obvious impairments protests against ableism, they may say that the person either (a) is too stupid to know better, or (b) is either faking disability or being used like a puppet via facilitated communication.

In any case, the only "true" autistics are apparently the ones who are willing to shut up and be grateful for whatever attention/abuse that non-autistic people are willing to bestow upon them. 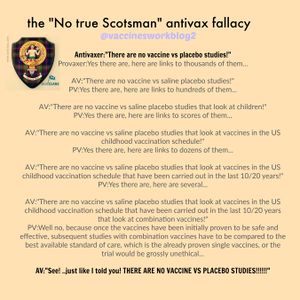 From the Vaccines Work blog

All the above being said, one should be wary of an "inverse Scotsman": Taking an (usually extreme) example of a self-proclaimed "Scotsman" as typical of the class. To provide one example, "I don't like Christians, because Bob says he's a Christian, and he lies, murders, and steals" would probably not be very sound, since in the context of Christianity, Bob is probably not a very good at being a Christian (what with all the lying, murdering and stealing). Further, if the objection also includes "Bob also argued against the divinity of Jesus Christ", that would probably add a great deal of validity to the "Bob's not actually a Christian" claim.

Such is particularly necessary in political science, where the problem of self-proclaimed "Socialists", "Libertarians", "Conservatives" and so on who aren't actually all that whatever they claim to be can be particularly acute.[11]