A megachurch (also known as a McChurch) is defined as a church that receives more than two thousand parishioners every Sunday. That is only the dry Wikipedia definition, though. It is, in fact, a money-sucking device invented for the purpose of getting upscale Baby Boomer and Generation X families in the exurbs and suburbs back into church, turning them into a ready-made Republican Party voting bloc, and, of course, making its owners mighty rich.

Many megachurches are controlled by charismatic personalities and devolve into personality cults, inevitably resulting in many examples of scandalous and criminal behavior on behalf of the church and leaders.[1] 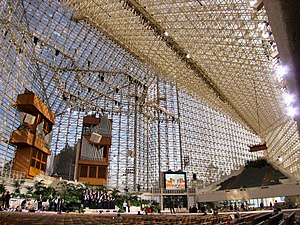 The Crystal Cathedral in Orange County, California, an archetypal example of a megachurch — and believe it or not, it's not a particularly large one. It was never actually a cathedral, and anyway, it went bankrupt in 2010. It was sold to the Roman Catholic Church the following year, and was renovated for use as an actual cathedral, reopened in 2019.

Megachurches use a lot of gimmicks to attract people (especially those in their twenties and thirties): rock music in the service, Christian motorcycle clubs, skateboarder ministries, "spiritual warfare", etc. They have chucked out the old hymns and sing a lot of repetitive "praise and worship" choruses. They are known for huge buildings with plush carpeted auditoriums, Jumbotrons, and modern sound systems, and incorporate bookstores, snack bars, fitness centers, schools, day cares, parking lots the size of several football fields (gotta love that suburban sprawl), and the kitchen sink — all of it serving to create a one-stop shop that acts as the focus of parishioners' social lives. (Can't let them get any worldly ideas that the pastor hasn't approved! Why, no, this isn't cult-like at all...)

Most megachurches follow either evangelical or Pentecostal beliefs, and their politics and social views lean towards the conservative/fundamentalist end of the spectrum. Some of the larger ones are associated with a prominent televangelist or radio preacher. While some megachurches are associated with the Baptists (especially the Southern Baptist Convention) many more consider themselves non-denominational, i.e. independent, not connected to a larger church organization, and with theology and structure dictated solely by the owner/head pastor.

More old-fashioned Christians often accuse megachurches of shaky theology. Despite their frequent support for socially conservative causes, they also have a reputation for being spiritually shallow, focusing more on "feel-good" positive messages and creating a sense of fellowship among parishioners (all the better to mold them into good little Stepford smilers) as opposed to building a genuinely deep and lasting faith in them.[2] Messages of self-sacrifice and service to God, or of punishment and penance for sin, often go unspoken in sermons in favor of variations on the Prosperity Gospel, downplaying any precise doctrinal stances that could turn people off. When evangelical Christianity's membership and political power began to decline in the '10s, many Christians argued that the megachurches had only themselves to blame.[3][4]

Generally, people are born into a church, they are baptized (if their church does youth baptism), they go to Sunday school, they take lessons in their church's catechism, and they are confirmed as a teenager (or baptized, if their church believes strictly in adult baptism). Or, if they convert as adults, they will take catechism instruction and then be baptized.

By contrast, joining a megachurch can be more like a job interview. Instead of catechism instruction, the prospective megachurch member may be put through a rigorous series of classes to determine what "spiritual gifts" (read: skills the church can exploit for $$$) the prospective member has, at which point they are assigned to such groups as the skateboarders' ministry or the "Gearheads for God" assembly.[5]

The most successful megachurches are predominantly based in suburban and exurban areas, most notably in the American South (aka the "Bible Belt") but also in the Midwestern and Western United States. Megachurches are rarer in the Northeast, possibly because of the preponderance of Catholicism, "mainline" Protestant churches, secularism, and liberal politics in that part of the country, though this isn't to say that they don't exist in the region; notably, Boston was the incubator for the aptly, if embarrassingly[note 1], named Boston Movement. Megachurches tend to be predominantly white, although black people are also well-represented in both the laity and in the top ranks; Creflo Dollar, Eddie Long, T. D. Jakes, and Charles Blake are among the more prominent black megachurch pastors. Latinos, conversely, are a vanishingly rare sight in most megachurches, likely due to the fact that most Latinos are Catholic. In terms of age, membership is skewed towards those between the ages of 35-49, i.e. people who came of age in the 1980s and '90s. The foremost growth years for megachurches as a whole were in the 2000s, which were, not coincidentally, the era of the George W. Bush administration, though they seem to have leveled off since then.[6]

The number of parishioners for a megachurch can often be deceiving. If you're wondering how they can fit so many thousands of people into one building... well, usually, they don't. Most megachurches have multiple sites (typically between two and four, though some have more than that) that often hold only about two thousand people each, and hold multiple services on Sunday and at other times throughout the week at each site, often with different styles of preaching and presentation to cater to different markets.[7]

The US is not alone in hosting the megachurch phenomenon. Australia, unfortunately, also has to put up with the likes of Hillsong Church in Sydney's western suburbs,[8] which has the same sort of mass media machine as its American counterparts, most famously the worship band Hillsong United, which grew out of their youth ministry and whose success reaches internationally. It also has the same sort of scandals — financial shadiness, sexual abuse, lying for Jesus, support for Australia's religious right, and most bizarrely, vote-stacking on Australian Idol to ensure that church-sanctioned contestants won.[9] South Korea also has to deal with them, playing host to four of the ten largest megachurches in the world, including the largest, the Yoido Full Gospel Church in Seoul with a membership of over 830,000 people and a head pastor whose record of scandal is not too dissimilar to his American counterparts.[10] In Brazil, meanwhile, evangelical Pentecostals in the American mold have grown into a major force in the nation's political and religious culture, supporting the right-wing candidacy of Jair Bolsonaro and flaunting extravagant wealth (including a church in São Paulo modeled after the Temple of Solomon) in order to lure in new parishioners with promises that (you guessed it) God will make them rich — an enticing prospect in a nation gripped by economic crisis.[11]

Note that, while megachurches by definition have congregations in the thousands, not all large churches are megachurches. Catholic cathedrals, for instance, are often grand buildings that can accommodate well over a thousand people, and often as many as three thousand or more, but these churches are almost never called megachurches, as the tight leash of the Catholic Church keeps them from the sort of doctrines and practices that define megachurches.