Breeder reactors can utilize nearly 100% of the energy contained in uranium and thorium ores, while the reactors currently used for nuclear power generation can use at most 1%. They can also reuse waste from existing reactors as fuel, until nothing but fission products is left. Since the supply of fertile materials on Earth is extremely large, the introduction of breeder reactors would turn fission-based nuclear power into a technology that is sustainable for nearly as long as solar power, i.e. until the Sun burns out.[1]

There are two fuel cycles investigated for use with breeder reactors:

Both cycles have advantages and disadvantages, especially depending on the kind of reactor used.

A fast reactor is a nuclear reactor which does not use a moderator - a substance that slows down neutrons. A thermal reactor uses moderator to slow down neutrons substantially. This is called a "thermal" spectrum, and its neutrons are called "thermal" neutrons. The most common moderator is water, and graphite is also common (Most graphite moderated reactor designs use gas, either helium

, as coolant. One of the remaining designs

that use graphite as a moderator and water as coolant, had to be retrofitted with additional safety systems for a very good reason. Several plants of this design were canceled during construction.)

Fast vs thermal neutrons have different probabilities of impacting atoms, and have different probabilities on impact of whether causing a fission event or some other event. Uranium-235 fissions easily with slow (thermal) neutrons, as does Uranium-233. Fast neutrons are less likely to hit a nucleus but when they do hit, are more likely to cause fission. Fast neutrons are more efficient at converting uranium-238 into plutonium. The physics works out so that uranium-plutonium must be fast reactors in order to break even on transmuting enough U-238 to Pu-239 to continue the reaction and not require additional fissile fuel. Fast neutrons can fission nuclei of isotopes such as U-238 and even numbered isotopes of plutonium, such as Pu-240, the later of which will have higher build up in the spent fuel of conventional light water reactors. Thus in theory fast breeder reactors are capable of breeding plutonium with lower content ratios of Pu-240 to Pu-239, which is favorable for the production of bombs [2] (plutonium production has in the past been almost exclusively done in dedicated production reactors, usually graphite moderated); however since fast reactors do not require to have these isotopes separated upon fuel recycling, that proliferation risk can be negated.

Due to the physics and engineering of the reactors, coolant must pass through the core, and thus water cannot be used as a coolant for a fast reactor because water is a moderator. Thus, they are somewhat more complicated. Usually they use liquid metals or inert gases as the coolant - mostly sodium or helium, but some Russian navy reactors also used lead or a lead-bismuth alloy. Research reactors sometimes use a sodium-potassium alloy, which is liquid at room temperature and avoids the problem of coolant solidification when the reactor is turned off, but is also more expensive. The coolants of choice for a fast breeder reactor also are alkali metals or alkali metal alloys which tend towards having somewhat violent chemical reactions with a wide variety of substances, including water (in even the slightest moisture content levels) and to a lesser extent oxygen.

Fast breeder reactors got the majority of funding during the Cold War because they allowed for production of plutonium to go in nuclear weapons. They are also less attractive for producing energy because safety systems on most fast-spectrum reactors thus far have been less fault-tolerant than those of their thermal-spectrum counterparts.

For the thorium-uranium fuel cycle, the physics allows both fast and thermal spectrum reactors to achieve a self-sustaining breeding of fissile fuel (U-233) from the input breeder fuel (thorium).

(LFTR, pronounced "Lifter") is a breeder reactor design, gaining renewed interest. It uses the thorium-uranium cycle, it has a thermal spectrum, and it uses a liquid fuel unlike all other modern reactor designs (with the possible exception of the Aqueous Homogeneoous Reactor

which wouldn't work in the thorium cycle because thorium salts aren't adequately water-soluble). The fuel consists of thorium and uranium in solution in a fluoride salt, usually with beryllium and lithium. The idea has been around since the birth of the nuclear age, and has been researched and pursued to some degree, but far less than other technologies. LFTR remains experimental and unproven.

Oak Ridge National Laboratory ran a mock of the core of a LFTR for 5 years in the Molten Salt Reactor Experiment (1965-1969) which demonstrated many of the fundamentals of LFTR.[3] The light water reactor at Shippingport, Pennsylvania in 1982 showed that there was 1.39% more fissile material present in the core than was put in after a 5-year run.[4]

The purported benefits include cheap electricity, better safety, good or better proliferation characteristics, incredibly large availability of fuel, and less nuclear waste by-volume and by-lifetime, the ability to extract and exploit the potentially useful fission-products from reactor "waste" (easier to do when the fuel is already liquid in routine operation), and perhaps most appealing of all, the potential to use working-fluid waste-heat to desalinate seawater at little-or-no detriment to the efficiency of the heat-transfer loops (the systems that convert reactor-heat into kinetic energy to drive the turbine which converts that kinetic energy into electricity). The purported negatives are that due to how long ago the above-mentioned MSRE was dismantled and its design-team disbanded, the vast majority of people with hands-on experience building a working model of this type of reactor are at best, long retired, and at worst, deceased. This necessitates putting a lot of resources into reinventing the proverbial wheel before a commercially viable LFTR can become a plausible venture. One of the areas that was identified as especially lacking in expertise needed to proceed with development was (and is) high-temperature metallurgy of components that will be in prolonged direct contact with the reactor's molten salts, and identification of an alloy which will be sufficiently durable for use in a reactor designed to operate continuously for up to 40 or possibly 60 years. Neutron moderators too may be problematic, as the MSRE used graphite as the moderator. Graphite tends to swell and grow brittle after prolonged exposure to a high-neutron-flux environment (such as the core of a nuclear fission reactor).

The traveling wave reactor (TWR) is similar to a breeder reactor which purports to be an improvement over existing designs. It's gone through several incarnations over the years. It works with spent fuel, breeding it into plutonium then using that. The wave in the name comes from the wave of use coming from the core of the reactor outwards.

The design caught the attention of Bill Gates, which means that either (A) they're something really really interesting or (B) a rich retired software mogul likes them.

Currently, patents for the design are held by TerraPower[6]. 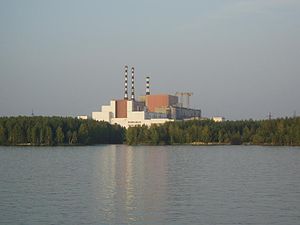 Currently there are two breeder reactors used for power production operating in the world:

in Monroe, Michigan, which was built and developed starting in 1957, and which suffered a partial meltdown in 1966. Repairs were attempted, and despite continuing intermittent operations, it was never again able to reach fully operational capacity and was shut down permanently and decommissioned in 1972. One reactor, of a more conventional design, was built there, going online in 1988. Reactor 2, which is not a breeder, remains in routine use today.

A prototype of a 1200 MW commercial breeder reactor, Superphénix

, was operating in France between 1986 and 1997. It was closed following an executive decision of a newly elected prime minister, Lionel Jospin, allied with the French Green Party. Its predecessor, a proof-of-concept reactor aptly called Phénix

operated and even provided power to the French electrical grid from 1973 until 2008, undergoing its final, and permanent, shutdown in 2009.

in Tsuruga, Japan was operational until the mid '90s, then shut down for 15 years. A few months after Monju was reactivated, a crane fell into the tank of liquid-sodium coolant in which the reactor is submerged. It has since been shut down permanently.

The anti-nuclear movement opposes the development of fast reactors. Their main concern is that breeder reactors are expensive, and the prototypes had engineering problems.[8] That's not really surprising, considering some of these organizations also oppose research into fusion.[9] Nuclear reprocessing, another technology which the movement is allergic to,[10] is a mandatory part of the fuel cycle. Additional criticism comes from proliferation experts, which worry whether the proposed anti-proliferation features will be sufficient. Overall the very words "breeder reactor" have become more politically toxic than nuclear energy all by itself. One of the first nuclear projects to be scrapped in a major industrialized country was a fast breeder in Kalkar, West Germany[note 1] and the whole kerfuffle happened before Chernobyl.