From RationalWiki
(Redirected from Bill Gates)
Jump to: navigation, search
This is a draft that anyone is free to edit as they would a mainspace page. 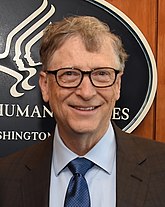 Bill the shill, plotting genocide in 2018.

William Henry Gates III is a software developer, business leader, investor and philanthropist[note 1] best known for being the co-founder of Microsoft and his philanthropy in sanitation, water availability, polio, and farming. Besides all this, he has often been a target of various population control conspiracy theories.

This claim originates from Robert F. Kennedy, a prominent anti-vaxxer, who cites a 2018 study[1] which states, "A total of 640,000 children developed NPAFP in the years 2000–2017, suggesting that there were an additional 491,000 paralyzed children above our expected numbers for children with NPAFP."

This does not directly support the claim, and if Robert had cared to go down in the paper a little further, the study debunks his own claim by stating:[1]

] surveillance data from India does not provide information about the etiology of NPAFP, and it is tempting to suggest that OPV-related [the vaccine] GBS [See Guillain-Barré syndrome

] may be the cause for the rise in NPAFP seen across the country.

However, GBS is unlikely to be the sole reason for the increase in NPAFP. GBS, caused by OPV, was usually reported soon after an OPV campaign. Our finding that the NPAFP rate in each year correlated best with the cumulative doses administered over the previous 5 years, suggests that they may not all have been OPV-caused GBS (occurring in 5 days to 6 weeks).

See: “Correlation does not imply causation”.

The study was slammed by critics for having “questionable” inferences and “should be considered spurious unless proved otherwise by further study and analysis using more rigorous methods”.[2] Some of the “important variables” left ignored in the study that “might have affected the validity of the correlations” are:

1.The Acute Flaccid Paralysis (AFP) surveillance data that the authors have used include reported cases of the 0–15 year age group and the rates are calculated forthwith. However, the use of Oral Polio Vaccine (OPV) in Intensified Pulse Polio Immunization (IPPI) or Pulse Polio campaigns is targeted toward children in the age range of 0–5 years. Hence, correlating the two does not actually answer the hypothesis unless some analytical evidence is provided to show that the AFP rate in the 5–15 year age group is not influencing the results.

2. There is the possibility that the sensitivity of surveillance and, therefore, the number of AFP cases reported depended not only on the broadened case definition, to include even atypical or non-classical AFP cases, but also on the focus and efforts in terms of active case search (ACS) visits by the surveillance officers. It is a reality that due to the transitioning plans, a shifting of focus from polio, and the reduced presence of specialized surveillance system workforce from partner agencies such as WHO, especially in Uttar Pradesh and Bihar, the number of ACS visits to the reporting and informer units of the AFP reporting network have decreased considerably. This might also be correlated with the non-polio AFP rates in recent years.

The authors responded to these criticisms, but noted a few key caveats, including "it is possible that new neurotropic enteroviruses colonizing the gut may induce paralysis." They also explicitly stated that:

Unfortunately, the majority of Kennedy’s sheep are unable to understand such terminology or have the ability to research any of the claims made by him.

This claim was also fact checked by Full Fact,[3] AFP,[4][5] The Logical Indian,[6] Lead Stories,[7] India Today[8] and PolitiFact.[9] While it is true that the observed incidence of NPAFP cases increased in the late 2000s and has stayed relatively high, but this doesn’t mean the polio vaccine was necessarily the cause. The funding of charities boosted polio vaccinations as well as better diagnosis and reach of healthcare.

The BBC reported that public healthcare along with diagnosis of polio have been substantially better.[10] While it is true that more than 496,000 children were paralysed, and that rate is higher than the past decade, but better reach of healthcare in India is accountable for the high numbers.

Other countries, including the UK, have also observed increased reports of unexplained AFP.[11]

Although the polio vaccine can itself result in cases of “vaccine-associated paralytic polio” according to the World Health Organisation,[12] but the rate is low. Approximately 1 in 2.7 million doses of the oral polio vaccine are associated with paralytic polio.[12] Using that 10 billion doses as a benchmark and WHO's figure of 1 paralyzed child for every 2.7 million doses equates to about 3,700 children paralyzed worldwide over a decade — still a tragic number, but far from Corbett’s estimates. Hence, in order of it be true, 1,339,200 million (1 trillion) children must be vaccinated in the limited 7 year time, which is more than the population of the entire earth. You don’t need a mathematician to tell you that is extremely low and disproves the claim.

The World Health Organization has said oral polio vaccine (OPV) is an extremely safe and effective tool for immunising children against the disease.

Since the eradication of polio in India, there have been some scares of tainted vaccines. But data from the WHO show that, between 2000 and 2017, there were 17 cases of vaccine-derived poliovirus.

His MenAfriVac paralysed 50 children in Africa![edit]

This claims seeems to originate from Candace Ownes.

A peer-reviewed study from PMC stated:[14]

The campaign, which had started in Gouro on 11 December 2012, was abruptly stopped on December 15 when vaccinated children reportedly fell ill.

The incident prompted a Chadian journalist (subsequently identified as a regime opponent) to post a story on December 22 that described 40 children who had become severely ill (some with paralysis) in Gouro after being vaccinated with MenAfriVac. Within 24 hours the story was reposted by an online national news channel, and a few days later the information made headlines in Chadian print and online media. The story was subsequently picked up by European and US antivaccination activists, who accused MVP and partners of deliberately committing genocide among Africa's poorest and most fragile populations. The story was published on the website of an international news agency 41 days after the publication of the first blog, but was removed within a couple of hours thanks to the swift intervention of MVP communicators.

Chadian authorities invited an international team of clinicians and epidemiologists to investigate the problem. An investigation proceeded; all cases were examined by physicians, who did not find cases of paralysis, and all of the affected individuals recovered without incident. These findings were published in an official report. The episode was determined to be "mass psychogenic illness" — an unusual phenomenon that has been well described, the affected tending to be clusters of young girls with unusual clinical findings that gradually improve

To repeat: According to the 2015 evaluation, the incident was a case of "mass psychogenic illness". Psychogenic means that the causes were mental or emotional rather than physical. The evaluation found that "all cases were examined by physicians, who did not find cases of paralysis, and all of the affected individuals recovered without incident". The symptoms were triggered in part by “the occurrence of crises among other patients”, and even an unvaccinated child complained of similar illness. Chad’s Ministry of Public Health said the “mass psychogenic phenomenon” was also known as “collective hysteria” or “collective obsessive behaviour”.

The Chad government on the issue said “all the different medical examinations performed on the patients were normal”.[15][16] Not only did physicians find no cases of paralysis, but all the children recovered. A Lancet study on meningitis vaccinations in Chad also referred to the Gouro incident: “Coverage in the last phase of the vaccination campaign fell after reports of adverse events after vaccination, concerns that were subsequently shown to be unfounded.” [17].

This was fact checked by Africa Check,[18] and The Dispatch Fact Check[19] and was reported on by Quillete[20] and Fogarty International Center.[21]

This claim was also fact checked by Africa Check[22] and Snopes and reported on by Retraction Watch, BBC, WHO and the Washington Post

The Indian government is arresting him for this![edit]

The Italian government is arresting him![edit]

This argument is similar to claiming that a school principal was behind the burning of a school since she did a fire drill 6 months before it.

DRI's lawyer at the time, Gerry Davis, said that the company's forensic researchers found that 86-DOS infringed on DRI's intellectual property. But DRI never pursued legal action against Microsoft or IBM. Kildall died in 1994, but the rumor that Microsoft copied his creation persisted.

Bill Gates at Microsoft sold an operating system to IBM, and reaped then-unimaginable rewards, shedding a cloud of speculation hung over that part of the story, whether the code was stolen from CP/M (QDOS).

Kildall maintained that QDOS, and subsequently MS-DOS, had been directly copied from CP/M and thus infringed on his copyright. DRI attorney Davis claimed forensic experts had proven that MS-DOS had been copied from CP/M, but that in 1981 there was no way to go to court over copyright infringement and get a judgment. The latter, at least, was found to be not true. Just one year earlier, Congress had passed the Computer Software Copyright Act of 1980, which made copyright protection of software explicit, so why DRI didn’t take the battle to court at the time further suggests that the accusation was baseless.

Microsoft has stated that its hands were clean. Kildall maintained that QDOS, and subsequently MS-DOS, had been directly copied from CP/M and thus infringed on his copyright.

examined the code in question using a set of tools he developed for detecting copyright violations in software, and last month he published his findings in the pages of IEEE Spectrum.[25] He didn't find any evidence that MS-DOS copied code from CP/M (QDOS).[26]

How Zeidman did it and the real history behind it is extensively documented on the pages of IEEE Spectrum and the Journal of Software Engineering and Applications.

…comparing binary with source code, I found 80 matching identifiers. But with a couple of exceptions, these identifiers were all common words from operating systems and programming or just from the English language. I also found 11 matching strings, but again, these strings were all common words or phrases. And once I filtered the matching elements to eliminate common identifiers found more than 100 times on the Internet, all the matches evaporated…

…Next I compared the MS-DOS 1.11 binary code with CP/M binary code. There was only one matching identifier: “com.” This is a common abbreviation for a communication port like a serial port or printer port, and certainly not a sign of copying. There were also 65 matching strings, but they were all common words or phrases used in many operating systems…

…And that is that. Every lead brought me not to Bill Gates but to a dead end. QDOS was absolutely not copied from CP/M, and MS-DOS showed no signs of copying either. Kildall’s accusations about Bill Gates were totally groundless…