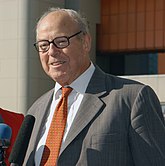 Hans Brix Blix (b. 1928) is a Swedish diplomat and politician, a member of the centre-right Liberal People's Party[1] and an advocate of nuclear power.

Aside from his 'cameo' in Team America: World Police, Blix is best known for two things:

Many in the US scorned him for the latter point, assuming him to be incompetent. And if Dubya, Cheney and Blair actually listened to him,[2] maybe they'd be able to leave their respective countries without almost-constant calls to be tried as war criminals.[3]

Blix has since been appointed the head of the United Arab Emirates nuclear program.

This politics-related article is a stub.
You can help RationalWiki by expanding it.
Retrieved from "https://rationalwiki.org/w/index.php?title=Hans_Blix&oldid=2296036"
Categories:
Hidden category: