The Doomsday Clock is a device maintained by the Bulletin of the Atomic Scientists at the University of Chicago which is used to indicate the threat of a nuclear, biological, or environmental disaster. It is a clock face, where midnight represents a nuclear war, and noon represents world peace. It has been "operational" since 1947 when it first appeared on the cover of the Bulletin, where it has appeared ever since. It has changed 24 times since 1947, moving forwards 16 times whilst moving backwards 8 times. The lowest time it reached was 11:43, following the signing of the Strategic Arms Reduction Treaty. It was previously closest to midnight during 1953, after the US and the USSR tested their thermonuclear weapons, where it read 11:58.[1]

Graph of the changes to the Doomsday Clock time since 1947. Note: The lower the graph becomes, the higher the probability of catastrophe is deemed to be.

The worst part regarding all of this is that nobody seems to acknowledge nor care about these solemn warnings. 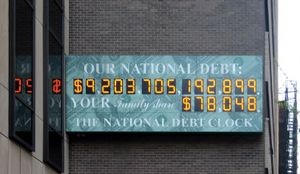