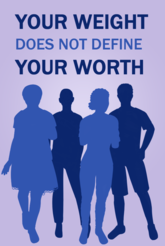 Wheaton's law applies no matter what someone's size is.

The fat acceptance movement, also known as fat activism or fativism, is a social movement that works to change attitudes towards fat people, be they people who are simply larger than the thin ideal[2] typical of modern Western society, or people who are actually obese. While advocating for realistic attitudes about body shape and size is not the same thing as addressing attitudes towards people who are obese, the two are often conflated. The 'Health at every size' (HAES) concept is often brought up in debates and discussions about the movement.

Either way, all reasonable people can agree that fat-shaming is dangerous and, in a number of cases, counterproductive.[3][4]

Unfortunately, this movement is a mix of valid points and utter woo, just like its counterpart on the other extreme, the pro-ana movement.

The first group of "fat activism" has more to do with issues of body image in the modern world. There is a strong push to define "healthy" and "at weight" as being extremely thin, especially when talking about women. These definitions do not account for a person being larger because they carry muscle mass, and often cast healthy but larger people as "overweight" because their bodies do not conform to the maxim[2] that one can never be too rich, nor too thin.

Further, what is a "healthy" weight is often debated, and affected by many other factors of a person's life. Though being overweight, even obese, if you gained that weight in an unhealthy way, increases your chances of developing health problems, it does not necessarily mean you have health problems at that point in time.

The concept of thin privilege is important in the modern fat acceptance movement as a social justice cause. This draws attention to the (often unacknowledged) social advantages held by people of average size over fat people, and the prejudice and discrimination faced by overweight people.

Negative stereotypes hurt fatter people. They can be thought of as greedy, lazy, unkind, sloppy, ugly, and un-sexy.[5] These prejudices put fat people at an unfair disadvantage.

In some countries, especially the US, body weight is related to classism and income disparities. People in poverty may not be able to afford healthy food or gym memberships. They may lack the time to exercise or prepare healthy meals. In the US, people who live in the poorest counties are the most prone to obesity.[6]

With current trends in the widening income gap between the upper and working class[7] and with confounding factors such as lengthening work hours (especially in sedentary "desk job" positions), unhealthy sleep cycles, limited time, money, knowledge, or resources to cook or prepare healthful foods[8] (including the convenience of fast food and the misconception that it is ultimately "cheaper" to eat out[9]), and a lack of knowledge or educational resources on what constitutes a healthful diet and lifestyle, it may not be as easy for people to reach or maintain the oft-idealized "healthy" weight. For many, poor health and obesity intersects heavily with poverty, food insecurity, and low-wage jobs.[10] Obese people in poverty may lack the time and money it takes to lose weight.

As if that isn't bad enough, fat people may find themselves in a catch-22: poverty can cause weight gain, and fat people get paid less. Fat people have lower wages,[12] and they face hiring discrimination.[13][14]

Discrimination against fat people is still legal in most of the US.[15]

Over time, fat people may begin avoiding doing things like eating in public or visiting the doctor for fear of being shamed.

Some opponents of the fat acceptance movement may claim that people are simply whining about First world problems because size discrimination is not as bad as racism, sexism, or anti-LGBT+ prejudice. This view ascribes autonomy to those who are overweight or obese, claiming it is self-inflicted; they are responsible for their condition due to a lack of self-control.

There is also the idea that telling people to "love their body" can be oversimplifying the issue. People with serious illnesses, people with serious body image issues, people who have self-harmed, transgender people with body dysphoria, and others may have complicated relationships with their bodies. Rather than just telling them what to do, the movement could help them to work through it.[16]

Blogs such as "This is Thin Privilege" have often been singled out for complaining too much.

Overeating, and consequently fatness, can also be criticized on environmental grounds because if it is widely promoted or ignored it can lead to a huge increase in carbon emissions.

When "body positive" is actually negative[edit]

Some people claim to be "body positive" when they're actually only being positive towards their own body type. Apparently they haven't realized that "body positive" doesn't just mean fat people.

"Body positive" celebrity Meghan Trainor writes songs viewed by critics to celebrate bigger girls while insulting the smaller ones. In response to these critics, she said, "I didn't work this hard to hate on skinny people, I wrote the song to help my body confidence — and to help others."[18]

She has made comments trivializing Demi Lovato's eating disorder [19].

Skinny-shaming ads like "real women have curves" seek to change the ideal body, rather than discard the idea of an "ideal" body type altogether.[20]

Skinny-shaming is bad (duh),[21][22] and it's not just reverse discrimination. It has roots in sexism,[23] and it can involve ableism when people are criticized for a perceived illness.

On the other hand, there are critics of the concept of "Skinny-Shaming"[24] Ultimately, though skinny-shaming is not as widespread as fat-shaming.[25]

Some people forget that, when advocating for social change, you also need to keep your facts straight. This can lead to pitfalls like:

Denying that lots of body fat is associated with health risks,[35] dismissing adverse health effects as mere nocebo,[36] or claiming other denialist beliefs is a very dangerous message. While it is important that the media be cautious of how it talks about weight issues and work to undo the damage caused by creating unrealistic ideals, it remains equally important that size acceptance/body positive activists, bloggers, and journalists acknowledge the genuine medical issues associated with excess body fat, and not fall into pseudoscientific traps themselves, and (as always) for everyone to keep their critical thinking skills honed.

For instance, Lindy West, a blogger at Jezebel who has studied and written extensively on body image, once wrote that "the government is literally waging a war on fat people",[37] a nonsensical overreach (and terrible misuse of the term "literally", unless the military is actually sending tanks and troops to kill the overweight). The government is trying to instill values of eating healthily and exercising in children, at a time when childhood obesity is steadily increasing.[38] This has nothing to do with a war on fat people or fatness - since a person can be fat and have an active life and eat well, thus, be healthy[39] - and everything to do with giving children the knowledge they need to develop healthy lifestyles.

Another claim by fat activists is that regardless of risk people have a "right to be fat".[40][41] Similarly there is debate over whether people have the right to take drugs and smoke and perform other behaviours that may be harmful.

In a society in which everybody pays for healthcare it may be legitimate to restrict or seek to modify behavior to reduce healthcare costs. Being fat can be compared to other lifestyle choices that may (debatably) incur healthcare costs, although it may be balanced against other rights such as the right to healthcare. But such societies have a highly inconsistent attitude to "unhealthy" or "dangerous" behaviour: some behaviours like drug-taking and smoking are frowned upon while others like mountain climbing or horseback riding are considered acceptable. Almost nobody complains about meeting healthcare costs of someone who falls off their horse, although it has been argued that horse-riding is more dangerous than taking MDMA; the moral attitudes to the two are very different.[42] However, reducing healthcare costs is not the only reason for discouraging unhealthy behaviour, and additionally, there may be a value to society in horse-riding (mounted police, sport, or exercise) that can be argued to outweigh the risk of injury.