Omar is a refugee from Somalia, her family fleeing after the nation plunged into chaos following the toppling of dictator Siad Barre.[1] After spending four years in a Kenyan refugee camp, the family secured refugee resettlement status in Virginia, and later moved to Minneapolis.[1] She attended North Dakota State University, graduating with a bachelor's degree in political science and international studies.[2] Prior to joining the House of Representatives, she served as a member of the Minnesota House of Representatives from the 60B district.[3]

On November 8, 2016, after nine Somali-American men were charged for conspiring to support the Islamic State,[4] Ilhan Omar wrote a letter to the U.S. District Judge of Minnesota, asking for a "restoration approach" instead of a "long-term prison sentence", as it is done for "patients with chemicals dependencies".[5]

Ilhan Omar's relationship with the socialist label is complex to say the least.[6][7] Policy-wise she supports universal healthcare, (which extends to price control for medical drugs, wider acess to abortion, contraceptives, vasectomies, prenatal and postpartum care, and STD and cancer screenings)[8], increasing taxes on the wealthiest Americans, establish a Federal jobs guarantee, raise the national minimum wage to $15, reinstate the Glass-Steagall Act and break up banking monopolies, and repeal right-to-work laws.[9] She also expresses interest in worker cooperatives.[9]

She supports LGBT rights, including banning conversion therapy,[10] opposes Donald Trump's ban on transgender people serving in the military[11] and support reforms to combat injustice in the criminal justice system by legalizing marijuana, abolishing mandatory minimum sentences, and wants to address drug addiction as a health issue rather than a legal one[12] by abolishing private prisons, restore voting rights for felons, and ban racial profiling.

Omar supports the Keep It in the Ground Act,[note 1] wants to end all subsidies to fossil fuel companies, and has the goal of ensuring 100% renewable energy by 2035[13] and also supports Alexandria Ocasio-Cortez' Green New Deal proposal.[14] Like AOC, Omar wants to abolish ICE, opposes deportation and detention programs, opposes the family separation and child detention policies of both Donald Trump and Barack Obama,[15] supports sanctuary cities, opposes Donald Trump's border wall, and supports the prosecution of federal officials accused of physical and sexual assault of people in detention.[16]

On foreign policy, she's in favor of boycotting and sanctioning Saudi Arabia, [17] and while she stated that she did not support BDS against Israel during her House campaign, but backed the movement after she was elected.[18] 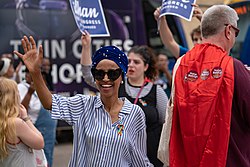 In 2016 she was elected into the Minnesota House of Representatives as a member of the Democratic-Farmer-Labor-Party and on April 20, 2017, Ilhan Omar was one of the two members who voted against HF1397,[19] a bill allowing life insurance companies to deny payouts to beneficiaries dead as a result of their furtherance of terrorism. The bill was proposed in response of December 2015 San Bernardino shooting, when Syed Farook killed 14 people and injured 22, then died in a shootout with police, and his mother fought to remain the beneficiary of insurance policies worth $275,000.[20] The bill passed with 127-2 votes.[19]

In the 2018 midterms she ran for Minnesota's 5th congressional seat and won, joining the Congressional Progressive Caucus soon after being worn in. As a member of the House of Representatives she voted to end United States involvement in the Yemeni Civil War,[21] voted in favor of the For the People Act,[22] which would require paper ballots in Federal elections, designate Election Day as a Federal holiday, restore the provisions of the Voting Rights Act, Shelby County v. Holder, mandate presidents and vice presidents to release their tax returns, mandate presidential inaugural committees to disclose expenditures and curb super-PACs that support individual candidates.[23] and opposed the proposed military intervention in Venezuela.[24]

As one of the the three Muslim members of Congress and a relative newcomer to politics, Omar has made some blunders, though some of these are the result of media bias and Islamophobia.

When the House Foreign Affairs Committee heard the opinion of so-called experts on the unfolding Venezuela crisis, her arguments against sactions were treated as being ex culo.[25][26] The media portrayed her as being out of line in spite of her correctly pointing that Trump's special envoy Elliot Abrams had been involved in the Iran-Contra along with various military coups in the 1980s.[27]

On March 23, 2019, during a CAIR meeting, Ilhan Omar stated "CAIR was founded after 9/11, because they recognized that some people did something and that all of us were starting to lose access to our civil liberties." [28] CAIR was actually founded in 1994.[29] Next month, the New York Post released an article headlined "Rep. Ilhan Omar: 9/11 was 'some people did something' Here's your something... 2,977 dead by terrorism".[30] In response, Donald Trump tweeted out footage of Omar's statement interlaced with footage of the attacks, typing in all caps, "WE WILL NEVER FORGET!"[31] Ilhan Omar responded stating she had received an increase in death threats following her comments.[32] Since then, many of Omar's colleagues have come out in support of her after the backlash.[33][34][35][36]

In 2018, Omar came under criticism for a 2012 tweet opining "Israel has hypnotized the world, may Allah awaken the people and help them see the evil doings of Israel.", a tweet that many have interpreted as anti-Semitic.[37] She apologized for her comment in January of next year, explaining "In all sincerity, it was after my CNN interview that I heard from Jewish orgs. that my use of the word 'Hypnotize' and the ugly sentiment it holds was offensive."[38][39]

On February 10th, 2019, Glenn Greenwald tweeted about House Minority Leader Kevin McCarthy's promise to punish Omar and fellow representative Rashida Tlaib for their opposition to Israel. Omar responded with "It's all about the Benjamins baby".[40] When asked on Twitter to clarify who she believed was paying American politicians to support Israel by Forward editor Batya-Ungar Sargon, she responded "AIPAC!"[41] She later apologized in part due to the backlash her comments received from House Speaker Nancy Pelosi and Majority Leader Steny Hoyer,[42] as well as criticism from Senators Cory Booker and Kirsten Gillibrand.[43] Despite the large opposition, she was defended by Senators Bernie Sanders, Elizabeth Warren and Kamala Harris.[44]

As a muslim woman in Congress, Omar has a target for white supremacists and wingnuts.[45]

In February 2019, Coast Guard lieutenant and white nationalist Christopher Hasson was arrested after stockpiling weapons and drawing up a hitlist of numerous politicians and media figures, Omar being included in the list.[46] Later that month, graffiti was found in a Rogers, Minnesota gas station bathroom reading "Assassinate Ilhan Omar", resulting in an FBI investigation in March.[47] On March 1, at a West Virginia Republican Party event, an exhibitor put up a poster falsely linking Omar to 9/11.[48] On April 7, 2019, a Trump supporter was arrested in relation to a phone call he made to one of Omar's staffers on March 21, saying "Do you work for the Muslim Brotherhood? Why are you working for [Ilhan Omar], she’s a fucking terrorist. I’ll put a bullet in her fucking skull."[49] He was found to have stockpiled six illegally owned guns and over 1,000 bullets.[50]

On March 9, Fox News host Jeanine Pirro said of her, "Omar wears a hijab, which, according to the Qur'an 33:59, tells women to cover so they won’t get molested. Is her adherence to this Islamic doctrine indicative of her adherence to Sharia law, which in itself is antithetical to the United States Constitution?"[51] This resulted in her block being bumped from the air for three weeks.[52]

On July 9, resident Fox News white supremacist Tucker Carlson levied a series of racist accusations against Omar stemming from her immigration. He said, "Omar has a lot to be grateful for, but she isn't grateful...she hates this country more than ever."[53] Carlson seems to be under the impression that immigrants only come to the United States because, "America likes to help. It makes us feel good," but the current system, "...designed to strengthen America is instead undermining it."

Carlson doubled-down on his statements the following night, saying, "She [Omar] has undisguised contempt for the United States and it's people."[54] Later a guest stated that, "...if she wasn't a member of Congress, she would be a member of the KKK." Omar responded to the July 9th attack by calling Carlson, "...a racist fool."[55]

Drawing the ire of the President[edit]

Rep. Omar was the subject of a racist tweetstorm from Pres. Trump starting on July 14th. Though the sentiment overall isn't new, the language of, "go[ing] back where they came from," is an old racist trope, grounded in centuries of xenophobia and nativism. Beyond the obvious irony of Mr. Trump saying people who complain about America should leave, as well as including three other Congressional Representatives (Alexandria Ocasio-Cortez NY-14, Ayanna Pressley MA-7 and Rashida Tlaib MI-13) who were born in the United States, Pres. Trump has insisted that these women are anti-American. Rep Omar responded to the initial tweets the same day, and on July 15 Rep. Omar and her three colleagues held a press conference, where Rep. Omar called for impeaching the president.

Pres. Trump managed to absorb all the oxygen in the news cycle for a week. Featuring July 15th statements and tweets, Pres. Trump tripled down saying he "doesn't have a Racist bone in my body!" (but of course we all know that racism is found in the gonads, which sadly we know he has). The House officially rebuked the President for his comments. Trump continued the racist train on July 17th with rally in Greenville, NC that featured a two minutes of hate where rally participants chanted "Send her back", after Trump referenced Rep. Omar, for 13 seconds. The following day Trump said he felt bad about the chant and actually tried to stop it, but when you consider he has lied about shit like this before, it's safe to say he doesn't mean it. Not to mention that the video of the event shows he did or said fuck all while the chanting was going on, not even signalling displeasure or discomfort with his body language, but simply waited for the chant to die down on its own.

Another bizarre far-right theory which Trump has promoted is that Omar once married her brother Ahmed Nur Said Elmi as an immigration scam. She did marry an Elmi in 2009 but they are not related. This rumor has been going around since 2016 and has been raised by other right wingers including Dinesh D'Souza, Rush Limbaugh, Jack Posobiec, and Tucker Carlson. It was apparently first raised by a troll on the Somali Spot website, who produced no evidence, and this post was later deleted. In corroboration someone found a social media post in which someone who might have been Elmi referred to her as "sister", but this word is a common term of endearment among non-relatives in Somali culture (much as "brother" or "sister" is in black American culture). As refugees from Somalia's civil war, her family's record-keeping wasn't terribly organised, but Omar has repeatedly denied that Elmi is her brother; she has shown legal documents relating to her family's immigration to the US that list her siblings and don't mention him. In addition, the claimed immigration scam where she married her brother to get him citizenship would make no sense as all her siblings were eligible for US citizenship. And since her mother died when she was 2, and Elmi is reportedly 3 years younger than her, other things don't add up. But as with Obama citizenship denial no evidence will suffice for some people.[56][57]