A microaggression is a relatively minor act of bigotry, discrimination or other harassment, whether real or imagined, usually unconscious or unintended, against a person, usually (but not always) towards someone in a marginalized group. Examples include conspicuously treating somebody differently from others (because of their gender, ethnicity, looks, size, sexual orientation or some other factor) or making casual comments to or about them which aren't actually hateful but which do carry judgemental or stereotypical implications.

Microaggressions like this are often seen (especially by those not on the receiving end of them) as "not that big a deal", and objections to them are sometimes interpreted as deliberate offence, but they can be uncomfortable, tiresome or upsetting for those who experience them repeatedly. Plus they tend to reflect (and reinforce) wider patterns of privilege, prejudice and stereotyping within society. 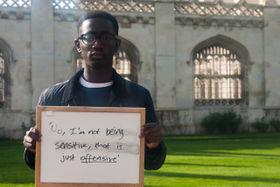 The "I, Too, Am Harvard" campaign in 2014,[2] and the many spinoffs it inspired at other universities,[3] explore black and other minority students' experiences of patronizing attitudes and stereotyping within a university culture where they are frequently treated as outsiders.

Sometimes claims of "microaggression" are questionable. On one occasion a professor corrected a student who capitalized the word "indigenous", and the student interpreted this orthographic correction as having "ideological implications."[4] Other incidents involved a teacher joking that he was on a "killing spree" while reviewing difficult material and a student being threatened for mocking the concept of microaggressions. The student government at Ithaca College passed the creation of an "anonymous microagression-reporting system" and some form of punishment for those who engage in the speech of "oppressors".[5]

The social psychologist Jonathan Haidt has suggested that microaggressions can contribute to unhealthy thinking habits in the form of magnification, labeling, catastrophizing, and negative mental filtering.[6]

The word microaggression has been criticized for being easily misinterpreted by those that are not already informed about its meaning. Since aggression usually is thought of as requiring intent, some falsely presume the term refers to a small, but still intentional, attempt to demean a minority group without understanding that microaggressions can be, and often are, unintentional. This can lead to someone getting offended or defensive when they're challenged about a microaggression since they view it as an attack on them. An honest attempt to help someone recognize and correct unintentionally hurtful comments or behavior is taken to imply that they are racist or bigoted. This sadly has made the term microaggression a very tempting term to intentionally misuse when creating a straw man 'social justice warrior' who believes every action is a microaggression that proves everyone is racist.