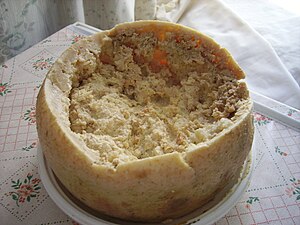 "Casu Marzu… so ammoniated… it scorches your tongue a bit."[1]

Cheese describes any food product which is created through combination of acid and milk. In most cases, the acid comes from enzymes that process some of the milk; in others, an acid like lemon juice is added to the milk.

Most kinds of cheese are delicious, but not all are: Casu marzu is made with live fly larvae (maggots of the species Piophila casei). That's hella gross. In any case, the plain blue mouldy kind is just fine and fights back with exhilarating determination. Some people are disgusted by cheese in general, and some researchers won the 2017 Ig Nobel Prize in Medicine for studying them.[2][3]

Poets (with the notable exception of James McIntyre) have been curiously silent on this vital subject.

A monument to the mighty mite.

Mites are responsible for making two types of cheese, milbenkäse[4] and mimolette[5]. Milbenkäse made with the mite Tyrolichus casei and mimolette is made with the mite Acarus siro. A film about cheese mites, coincidentally named Cheese Mites, made in 1903, was likely the first film banned in the United Kingdom[6] due to the perceived gross-out factor.

Some people claim the moon is made of cheese — BUT IT'S NOT! It's actually made of mashed potato.

Stilton, thou shouldst be living at this hour
And so thou art. Nor losest grace thereby;
England has need of thee, and so have I--
She is a Fen. Far as the eye can scour,
League after grassy league from Lincoln tower
To Stilton in the fields, she is a Fen.
Yet this high cheese, by choice of fenland men,
Like a tall green volcano rose in power.
Plain living and long drinking are no more,
And pure religion reading "Household Words",
And sturdy manhood sitting still all day
Shrink, like this cheese that crumbles to its core;
While my digestion, like the House of Lords,
The heaviest burdens on herself doth lay.

Despite the praise, stilton cheese's taste is offputting to newbies, but those who love blue cheese probably do appreciate another addition to their palette. Unfortunately, it's not as wildly appreciated, as one of the first British films ever to be banned was about Stilton cheese.

A 2005 study carried out by the British Cheese Board claimed that when it came to dream types, Stilton cheese seemed to cause odd dreams, with 75% of men and 85% of women experiencing bizarre and vivid dreams after eating a 20-gram serving of the cheese half an hour before going to sleep. This cheese should probably count as some sort of UN violation.

Cheese Rolling is an annual sporting event that takes place in Gloucester, England (and some other places). The format of the contest is as follows:

What actually happens is:

In recent years, thanks to coverage in the media and YouTube, attendance at the event has reached the point that the organisers recommend that people should not even try to attend. The site has a capacity of about 2000 people and in 2009, local police estimated that 15,000 people attempted to attend. The 2010 event has been cancelled due to safety fears.[7]

This food-related article is a tub.
You can help RationalWiki by filling it.
Retrieved from "https://rationalwiki.org/w/index.php?title=Fun:Cheese&oldid=2397182"
Categories:
Hidden category: