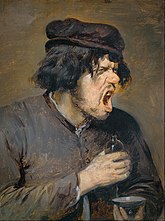 An argumentum ad fastidium (or "appeal to disgust" or "argument from disgust" or "wisdom of repugnance" or "yuck factor") is a logical fallacy that occurs when it is argued that something is morally wrong because it is gross (or conversely, it is good because it is beautiful).

The fallacy is an appeal to emotion and an informal fallacy.

Being gross is not inherently tied to being wrong.

If grossness determined wrongness, then (as Kass notes) wrongness would change over time — miscegenation would become acceptable while racism would become unacceptable, solely because it discomforts most people.[1] Furthermore, the definition of "gross" varies across cultures, regions, communities, and even individuals. This suggests that grossness is arbitrary and subjective, rather than an objective truth.

Conservatives and fundamentalists often discuss homosexuality using the words of revulsion, and seek imagery to portray that disgust.[2] This may be because disgust correlates with conservative self-identification.[2]

People from the United States and Europe who haven't tasted a lot of food from elsewhere, are easily disgusted by "creepy crawlies" — even potentially beneficial bugs such as some flies, which compost food waste, and spiders, who eat the now abundant flies, disposing of them easily — to the point of genocide. One day, I'll make them listen. Soon, the tables will turn! This seems to be cultural, since people in many traditional societies eat insects, spiders, etc. as a matter of course, but Westerners almost universally avoid doing so, and in fact tend to react to the very idea with revulsion.

Foods that appeal to people in some parts of the world can also be viewed as disgusting to people from other parts. This is particularly true with raw, rotten, fermented or preserved foods such as casu marzu

is notable for being a fresh fruit that some people find disgusting smelling. Organ meat is also a reviled food to many people in the West.

Leon Kass, discussing human cloning, argued both that "revulsion is not an argument" and that:[1]:20

In crucial cases, however, repugnance is the emotional expression of deep wisdom beyond reason's power fully to articulate it. Can anyone really give an argument fully adequate to the horror which is father-daughter incest (even with consent), or having sex with animals, or mutilating a corpse, or eating human flesh, or even just (just!) raping or murdering another human being? Would anybody's failure to give full rational justification for his or her revulsion at these practices make that revulsion ethically suspect? Not at all. On the contrary, we are suspicious of those who think that they can rationalize away our horror, say, by trying to explain the enormity of incest with arguments only about the genetic risks of inbreeding.

Kass' justification for respecting disgust is largely circular — we must be disgusted by certain things, because when people try to explain why it's wrong rationally, that too disgusts us. Beyond that, Kass's argument for a supra-rational overriding disgust appears entirely based in emotion. In addition, as Max Lewis notes: "Kass provides no way of distinguishing 'crucial cases' from any other cases. That is, he provides no way of distinguishing between feelings of disgust that reflect 'deep wisdom' and those that reflect ignorance or prejudice."[3]

Joe Carter argued that disgust must be accepted as meaningful, for "[i]f all ethical arguments must withstand the rigors of analytical reasoning then we will have to reject a great deal of our deepest moral presuppositions", specifically "incest, bestiality, necrophilia, and other moral horrors that lie within the Pandora’s Box of taboo behaviors."[4] It's entirely unclear why rational reasoning cannot prove these actions immoral (or moral) without invoking disgust; for a trivial example, necrophilia is likely to cause infection. In addition, this is essentially a circular argument — disgust must be a valid moral determiner, because these X must be immoral, because X is disgusting, and disgust…

in the eye of the beholder
See the main article on this topic: Argument from beauty

One argument for God is that nature is so beautiful that it requires a designer. Not only are there alternate mechanisms to allow for explanation of "beauty", but there are certainly numerous counterexamples to the idea that nature is beautiful.[5]