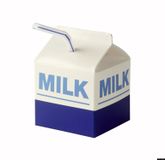 Nothing like a carton of ice cold milk to quench your thirst.

Milk is the substance produced from the mammary glands of mammals, intended for the nutrition of young mammals. Humans, not content with the milk their own species produces, are known to sometimes consume the milk of other animals, mainly from cows, yaks, camels, and goats. Since its purpose is to provide the nutrients necessary for young mammals to grow, milk in general has many fats, proteins, and the vitamins and minerals necessary for young mammals to thrive and grow.[1]

See the main article on this topic: Lactase persistence

Cow's milk is consumed by humans, and contains a number of vitamins and all of the minerals considered essential for the human diet.[1]

Milk is heavily promoted in the United States, by both the milk lobby and the government. For example, schools participating in the National School Lunch Act are required to provide milk with their meals,[2] and a nationwide commercial campaign featuring the slogan "Got milk?" was funded by the California Milk Processor Board.[3] The claim that milk makes for strong bones and reduces fractures has been criticized. Walter Willett, MD, PhD, professor of epidemiology and head of the nutrition department at the Harvard School of Public Health, claims that there is no evidence that milk consumption reduces risk of fracture, and that countries where little milk is consumed have low rates of fractures.[4] Peter Jaret, a pediatrician, gives an impassioned argument about owning up to milk being a lot less good for you than we think it is.[5]

A 20-year long epidemiology study of 60,000 Swedish women found that those who drank the most milk had almost a 2-times increased death rate vs. the lightest drinkers. Women who drank the most milk were slightly more likely to die from cancer or to break a hip (but overall fractures were comparable). Evidence suggested that the sugar D-galactose (which is metabolized from the lactose in milk) may be the culprit. In mice, D-galactose causes "chronic inflammation, oxidative stress and rapid aging".[6]

See the main article on this topic: Raw milk movement

Raw milk is unpasteurized milk, which is to say milk that has not undergone the process of swift heating and cooling meant to reduce microbes in milk and other products. Critics of the pasteurization process say that it destroys nutrients present in the milk, and indeed 10-30% of the vitamins C and B1 present in milk are destroyed during pasteurization.[7][1] However, raw milk has been linked to a number of outbreaks of illness.[7] Out of all self-reported cases of dairy-associated outbreaks between 1998 and 2011, 79% involved raw milk.[8] Advocate claims that the cows' udders could be washed with antiseptic prior to milking was countered by the claim that bacteria were also present inside the udder.[7]

The terrible price of pasteurization[edit]

See the main article on this topic: Louis Pasteur

This is what we have to lose.

There is more to raw milk than the risk of disease and trivial nutritional benefits. Certain cheeses, when made with pasteurized milk, can come out radically different. One example would be St. Nectaire.

Normally, St. Nectaire cheese, produced in the Auvergne region of France, has a grey moldy crust, and is delicious.[citation NOT needed] However, when created with pasteurized milk, St. Nectaire has a white, smoother, crust, and while palatable, has a markedly different taste.[9] In addition, the FDA recommends against the consumption of unpasteurized cheeses such as brie

[10] and has halted the import of a number of cheeses that did not meet their bacteria standards,[11][12] and requires certain cheeses to be aged for a minimum period before importation is allowed.[13]

PETA launched a facepalm-inducing campaign linking the consumption of milk to autism. The problem is that there is zero evidence for such a link. They were (rightfully) called out on it by several news outlets, websites and, of course, by people on Twitter.[14][15][16]