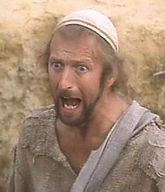 Not the messiah, just a very naughty boy!

Monty Python's Life of Brian is a parody of the messianic fervour in Judæa during the time of Jesus. It's considered very funny. When Norway vetoed its release there, it was marketed in Sweden as 'The film so funny it was banned in Norway'.

Life of Brian, as well as being hilarious, brings up some important aspects about the nature of cults. It very clearly shows the speed that they propagate and get out of hand, as well as the gullibility of the followers and their ability to blindly do anything their "leader" says; even if their leader didn't actually say it or in fact said the opposite.

Production was thrown into crisis when original financiers EMI read the script and dropped out a few days before production began. After a desperate and futile attempt to secure funding from another company, they were finally aided by George Harrison of Beatles fame, who put together the money and in the process founded successful British film company Handmade Films.[1]

Many Christian groups opposed the film's supposed anti-Christian message, despite such a message being curiously absent from the film. Showing admirable ecumenical spirit, the American Rabbinical Alliance, the Union of Orthodox Rabbis of the United States and Canada, and the Rabbinical Council of Syrian and Near Eastern Sephardic Communities of America also denounced it as "blasphemous", "grievously insulting", and "a vicious attack upon Judaism and the Bible and a cruel mockery of the religious feelings of Christians."[2] It seems that the controversy has much in common with the Harry Potter-related controversies in that no one who was upset by the film had watched it or even knew anything about it other than what another offended person told them.

In the UK, film classification and censorship is a matter for local councils, and 11 councils banned the film while 28 imposed additional age restrictions above those recommended by the (advisory) British Board of Film Censors, limiting it to over-18s only (X certificate). The BBFC had taken legal advice and determined the film was not blasphemous, passing it as AA (age 14 and over). The distributors refused to let it be edited or shown with an X certificate, so it was unshown in several additional council areas. In Harrogate the film was banned by councillors without watching it; a similar prohibition in Thanet was overturned a few months later.[3] Despite arguments about blasphemy, the BBFC suggested that bad language and nudity were the councils' chief concern.[4]

After many years, several Christian groups and churches had showings of the movie after stepping out of their echo chambers and realizing that it was just a funny movie that had little if any blasphemous material.

In 2008 Devon council finally rescinded the X certificate after the film was voted the fans' favourite at the English Riviera International Comedy Festival in Torquay.[5] Glasgow lifted its unofficial ban in 2009.[6] Dorset reduced the X certificate for one screening in 2015 but insisted the original decision stood.[7]

The film was banned entirely in Ireland, Norway, and Singapore.[8] The ban in Norway was on the basis that it violated Section 142 of the Norwegian Constitution, which prohibited insults to religious groups.[9] The Norwegian ban was lifted later in the year, but the film started with a clarifying announcement that Brian "wasn't Jesus."[10] The Irish ban was lifted in 1987.[11]

The Pythons themselves denied that the film was in any way a mockery of Jesus; Jesus himself (played by actor Kenneth Colley) appeared in the film preaching the Beatitudes, but was portrayed with an aura of respect as the troupe found nothing in Christ to satirise. Despite being non-believers, they agreed that Jesus was "definitely a good guy" and found nothing to mock in his actual teachings: "He's not particularly funny, what he's saying isn't mockable, it's very decent stuff", said Idle later.[12]

Despite all that, it is a surprisingly popular movie among students of theology, mostly because it parodies the incredibly dreary and boring "Bible movies".

John Cleese and Michael Palin had a "debate" with Malcolm Muggeridge and Mervyn Stockwood, the Bishop of Southwark, on an hour-long chat show 'Friday Night, Saturday Morning' hosted by Tim Rice, lyricist of the similarly controversial Jesus Christ Superstar. The Bishop severely criticized them, burying the Pythons in a flood of logical fallacies and nonsense.

Palin has said of the debate, "How pathetic, hopeless and meaningless and juvenile it was. Instead of there being any sort of division between us afterwards, they came up as though we'd all been 'showbiz' together, out doing an entertainment, with the Bishop saying 'That all seemed to go very well'. I hadn't realised they weren't being vindictive, they were just performing to the crowd.", while Cleese, who initially enjoyed the debate has said after watching it years later that "it left him bored and he realised that there was no attempt at a proper discussion, and no attempt to find any common ground."

Both Muggeridge and the Bishop had watched the film shortly before the debate but had missed the first 15 minutes because they were 'having such a nice lunch.' Because of this they did not realise that the film was not a satire of the life of Jesus making the film, as Terry Jones points out "heretical, but it’s not blasphemous."