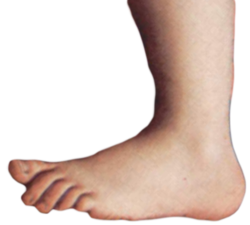 Monty Python is the greatest sketch-comedy group ever.[citation NOT needed]

We're not going to bother putting in quotes, as nearly every line out of their mouths is quotable, and plenty of other quote sites exist. Besides, most of the geeks who frequent this site can recite most of Monty Python and the Holy Grail from memory anyway (and have you ROTFLOL).[1]

According to Terry Jones, most people don't realize that Monty Python is an anagram of his name.

Various sources have mentioned that other proposed names for the TV show included The Toad Elevating Moment; Owl Stretching Time; Glen Dibley's Flying Circus; A Horse, a Bucket, and a Spoon; and It's.

Their first feature film (unless you count And Now For Something Completely Different, essentially a feature-length clip show), Grail is a spoof of the legend of King Arthur, and a musical. It stars Graham Chapman in the lead role, which he plays straight, with hilarious results. It was directed by the two Terrys, with them taking the reins on alternate days of production. The subsequent films were directed by Terry Jones alone, since the dual-director idea was nerve-wracking in practice.

Each of the players takes on several roles, both male and female, in the film. This would be repeated in their later films.

While most of the film is a classic, some scenes stand out in the public memory:

And, last but not least, the greatest credits roll in movie history.

Terry Gilliam, heretofore seen little, also took on several roles, usually covered in mud, the most notable of which is Arthur's horse and squire, "Patsy."

In 2007, Eric Idle, with the help of John Du Prez, wrote a stage musical based on Monty Python and the Holy Grail called Spamalot. It's considered lulzy and amazing even by the Philistines who don't enjoy culture and art

See the main article on this topic: Life of Brian

Despite vociferous protests from Christians, this parody of Jesus' life from the early 80s has remained popular. It was recently voted the top comedy film of all time by British viewers.

The film was banned for eight years in the Republic of Ireland and for a year in Norway. It was marketed in Sweden as "The film so funny that it was banned in Norway."

The closing theme from the crucifixion scene, "Always Look on the Bright Side of Life", remains a perennial favorite. It was sung by survivors of the Welsh Guards as their landing ship, Sir Galahad, was bombed and on fire in the Falklands War. It was also sung at Graham Chapman's funeral.

This film, which is more of a series of elongated sketches, is their most uneven post-television production. They still argue about why, but one reason that is given is that for various reasons, Cleese did not want to sit down and work on rewriting it one more time to tie it together better. Originally planned as the story of one Everyman's life, probably once again using Chapman as the lead, it ends up having its only continuous thread being that it proceeds from birth to death. Some of the individual sketches are very good, but others fall short of the Monty Python standard.

Like all their films, it is also a musical, featuring timeless classics like "Every Sperm Is Sacred."[4], as well as their musical magnum opus "The Galaxy Song".

The phrase "every sperm is sacred" has been used to criticise the anti-masturbation lobby (a group of non-wankers), and has become like a proverb in discussions of animal and human discourse as a result of the song, with the song being used to criticise those who believe that every embryo is sacred – whether it be cloning, abortion, or anything involving stem cell research. The phrase has been used in Richard Dawkins' The God Delusion, and the song was also seen as symbolic of a watershed moment, whereby the tenets of Catholicism were allowed to be ridiculed openly.[5]

As much as they still accord some grudging respect to each other, rifts have formed between some of the surviving core members to the point where they refuse to all gather in the same place at the same time. One of their DVD extras makes some fun with this, by having a discussion with all five surviving members apparently in the same room, achieved through electronic trickery and deception. Eventually money did bring them together, and the surviving five reunited on stage in 2014 after losing an expensive court case to producer Mark Forstater.[6]

Chapman, Cleese and Idle were all members of the Cambridge University Footlights Revue, which at that time also included the future Goodies — Tim Brooke-Taylor, Bill Oddie and Graeme Garden. The Frost Report brought them together with Jones and Palin at the instigation of Barry Took (a bloody good scriptwriter/comedian/show host in his own right).

God is said to be the only character to have appeared in all the Monty Python films.

Eric Idle voiced the incompetent wizard Rincewind in the Discworld

video games, based on the novels by Terry Pratchett.