Chicago, of the oblast of Illinois, is widely regarded as the greatest city in the world, largely due to its flavor industry. It is the third largest city of the US and sometimes called the "windy city", though nobody knows why.

Chicago is known for a local accent that essentially inverts the Northeastern accent -- instead of dropping final Rs and using mushy vowels, Chicagoans overenunciate their consonants and jam all their vowels into the fronts of their mouths. Downstate Illinois accents generally range from a typical Midwestern accent (i.e. the first accent to come to mind when one hears the phrase "American accent", aka. general American or newscaster's English) to one that sounds Southern, depending on how far south one goes (a mix between the two often happens closer to the "border" between the two accents' ranges and it is not uncommon for people from further north to mistake it as Southern[1]). People originally from the state capital, Springfield, would probably be best described as having the former accent, though any Chicago politicians there are more likely to have their hometown's accent.

Nearly 94% of the Midwestern flavor industry is supported by Chicago-flavored foods, such as deep-dish pizza, hot dogs (real hot dogs), Old Style beer, Eyetalian beef sammiches, and cheesecake. Jon Stewart didn't think Chicago style pizza was even pizza,[2] until a Chicagoan showed him the error of his ways. (He still refused to eat it with a knife and fork, however. "What am I, a fuckin' animal?!")

Chicago is home to Ferrara-Pan Candies, makers of Lemonheads and Boston Baked Beans. If you drive by the factory on Interstate 88 and roll down the window, the air smells like Atomic Fireballs. Not only that, other nice-smelling areas of Chicago include the Tootsie Roll plant on the South Side and the Blommer Chocolate factory in the North Loop. 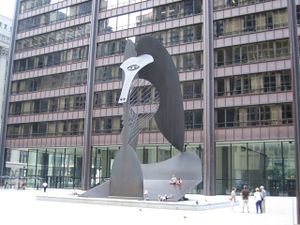 Chicago is the birthplace of the first skyscraper, the Home Insurance Building

, which stood a less-than-thrilling-today height of ten stories. This was when buildings with steel skeletons were still new, so ten stories was a pretty amazing sight to the public of the late 19th century.

Chicago is also the home of the Sears Willis Sears Willis Sears Tower, which, from ground level to highest point, is still the tallest completed building in the world, no matter what Taipei thinks featured in Ferris Bueller's Day Off.

Other notable examples of architecture[edit]

There is also this pre-World War I era outdoor insane asylum at the corner of Clark and Addison where up to 39,000 nutcases shell out their hard-earned money to watch their team tank choke compete against 29 other teams.[3] The fans are usually too drunk to care[4] are loyal to the point of delusion[5] LOVE EVERY MINUTE OF IT! Besides, where else can you see apartment houses with roofs that have been reshingled as billboards? Or hear Ozzy Osborne butcher "the anthem of baseball"?[6] 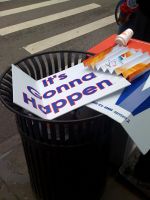 Chicago's 2016 Olympic bid has a 100% chance of succeeding, unless Mayor Daley manages to screw it up (there is a 95% chance of this happening). Examine the following other cities with a bid and why they will not get it:

Madrid - Spain hasn't exactly been a major presence in the world since the 1600's. Also, they will not pick a European city immediately after the upcoming 2012 London Olympics. Besides, Barcelona hosted the 1992 Olympics.

Tokyo - Too soon after another Asian Olympics, the 2008 Beijing event.

Rio de Janeiro - Too many caipirinha's/poor coverage of buttock flesh on beaches.

The government has a one-branch government. All decisions must be made by and approved by the Daley family. It was once said of Daley Sr. was that his idea of affirmative action was nine Irishmen and a Swede. (In extraordinary circumstances, a legislature, named Oprah Winfrey, may be convened.)

Since 2019, the city has been ruled with an iron fist overseen by a wicked cop-lover black lesbian named Lori Lightfoot (a national first).

Illinois' largest and most heavily-armed street gang. They've been running on the grease from the Daley machine ever since they stomped all those hippies at the 1968 Democratic National Convention.[7] That's the wage for protecting and serving the most powerful.[8] They were also caught operating a black site to torture and illegally interrogate people. Hey, the best way to catch criminals is to become one, right?[9]

Oddly enough, despite the bravery of the boys in blue, Chicago is internationally notorious as one of the most crime-ridden cities in the world. Its reputation goes way back, all the way to when Al Capone became Public Enemy Number One and continuing through the riots of the '60s, the decline of the Cabrini-Green housing projects, and all the way into the present, when it's become a whipping boy for right-wing pundits bemoaning the decline of America's cities while claiming that gun control doesn't work. Most of the city's reputation is hype, though. In truth, Chicago's murder rate is only slightly above the national average for major US cities, and far below its Midwestern neighbors Detroit and St. Louis; it's just that being home to over two and a half million people means that a lot more people get shot than in a smaller city with a comparable crime rate. For unknown reasons, the murder rate skyrocketed in 2016 by 58%, such that it accounted for half of a rise in the murder rate in the US all by itself, and just as mysteriously, it has started to drop since. Neither pattern was repeated in other American cities, and its causes have baffled researchers.[10]