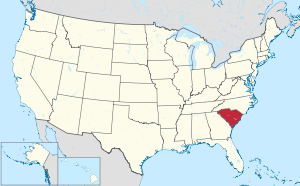 Deeply Biblical and deeply poor. That's the South for ya.

South Carolina, "The Palmetto State", also known as "America's Germany", was the first slave state to secede from the Union and didn't fully return until July 2015.[1]

The only thing tying the Carolinas together is their football team. The last time South Carolina was of any consequence was when people were allowed to own other people, and South Carolinians threw a fit when it was suggested that maybe that wasn’t O.K. anymore.

S.C. in the national spotlight[edit]

In part of South Carolina in the 1970s, you could pick up two television stations off the ol' wabbit earz. One of them, the ABC affiliate in Anderson (channel 40), signed on at 10 AM. The other, the ABC affiliate out of Asheville, North Carolina (channel 13) had a fuzzy picture. Real diverse choice of programming there. On Saturday morning you watched SuperFriends and the Laff-O-Lympics on channel 13 and changed to channel 40 midmorning to watch them again with a better signal.