A faggot is a British regional food specialty made out of pork offal and fillers. Typically they are served with gravy. Although most faggots are made at home or in the local butcher's shop, deep frozen faggots are available at your local freezer centre if you live in Britain.

They are mainly a West Midlands dish but also popular in south-western England and Wales (where they are known as ffagodau). 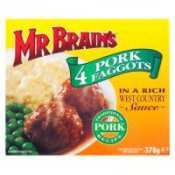 The most popular brand of commercially produced faggots is Mr Brain's®. While the brand maintained a 90% marketshare, the frozen faggot market declined significantly in the late 1980s with just 12% of British households consuming the product frequently. The company briefly tried re-launching the product as an aphrodisiac. The campaign included the use of pandas, as research had shown that key demographic groups identified pandas as having trouble conceiving. One of the ads used the line, "when they said you were a Giant Panda they weren't kidding". The campaign was short-lived and resulted in their current rebranding as Mr Brain's (formerly it was branded Brain's). When the Mr Brain's re-brand was launched, it included the slogan, Manbuilding.[1]

In 2003 the company launched National Faggot Week [2]. Current brand owner, Kerry Foods, advertise the product with the slogan, "You asked for it! Now with more sauce."[3]

Faggot is also an archaic British term for a bundle of sticks or twigs, usually for firewood. Faggot shot, which consisted of a bundle of bits of metal, was named after this. A passage in Tolkien's Fellowship of the Ring depicts Aragorn wielding a flaming faggot. The Italian word for bassoon is fagotto (plural fagotti).

The shorter 'fag' is a slang British term for cigarette, which has made small inroads in the American colonies, also.

In colonial North American English, "faggot" and "fag" are common derogatory terms for male homosexuals. Subtle linguistic homophobia has helped this term take on additional, more general derogatory meanings, especially among children. In March of 2007, Ann Coulter referred to Democratic presidential candidate John Edwards as a faggot. She later attempted to backpedal and claimed that this was simply a "schoolyard taunt."[4] Many other conservatives and various hate-mongers use the word a lot to demonize homosexuals.

Some gay rights advocates have reclaimed the term and use it in a non-derogatory fashion, along with queer, gay, and other related terms. However, this reclaiming is largely self-conscious, aware of the past and current use of the terms as derogatory. Thus, the use of "fag", "faggot", and related terms is largely ironic, although with some measure of pride. A very public example was sex advice columnist Dan Savage's having his correspondents use the salutation "Hey Faggot" in the early years of his Savage Love column. 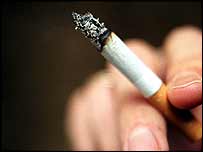 "Dying for a fag" - a Brit enjoys a crafty poof puff.

In American English, "fag" means a gay male. Depending on the context, this is either really ugly or really cool — compare to the usage of nigger the n-word.