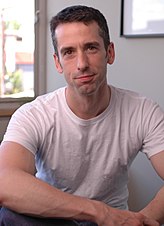 Dan Savage (1964–) is the author of the weekly sex- and relationship advice column Savage Love. Unlike many advice columnists who might encourage people to put their own needs aside for the sake of saving a relationship, Savage often tells people having relationship issues to "Dump the motherfucker already" (DTMFA, for short) or to have an affair to get their needs met. He does not give such advice indiscriminately, but rather ensures that a given situation meets particular criteria.

Savage typically presents his advice in a straight-forward (and sometimes, extremely snarky) manner.

He is not related to Michael Savage, who is also said to go up the down escalator.[citation NOT needed]

For many people, straight or gay, Savage has amassed something of a cultish following.

Blunt, sarcastic, flippant. Back in his early days of writing advice columns, he had a standard salutation of "Hey faggot"; although he hasn't used it in a very long time, he does use terms like that rather profusely in the spirit of reclaiming them. He is also a ranter, and most of his podcasts start off going off at some length about politics and sex in the news before getting into questions.

Savage is opposed to mandatory monogamy, and in addition to being generally supportive of people who choose swinging or polyamory, has been known to condone affairs under certain ethical conditions, usually a freezeout from the other partner or a medical inability to have sex. He strongly disapproves of people (especially men with female partners) who don't offer oral sex to their partners. He also feels pretty strongly about trying to keep children out of the crossfire of failing relationships, and in such cases usually prefers reconciliation to divorce unless there's abuse involved.

He once answered a trans man's honest query with a flat "Yes"[2]; in context, the issue revolved around the trans man's partner's dislike of the smell of his vulva, and Savage feels very strongly about ending relationships with major sexual incompatibilities. In fact, as a general rule, he treats non-sexual issues as secondary concerns unless verbal or physical abuse is involved.

Savage feels very strongly about LGBT youth in small towns leaving and moving to cities at the earliest feasible opportunity, based on a concept called the Urban Archipelago,[3] the now-familiar county-by-county map of swaths of Republican red surrounding splotches of Democratic urban areas. This idea of leaving for areas that are more accepting rather than trying to change what they'd leave behind is one of the underlying motivations of the It Gets Better project, mentioned below.

He believes partners should be "good, giving, and game" -- in other words, willing to at least try out their partner's kinks, as long as they aren't humiliating or potentially dangerous, but overall feels that honesty and informed consent are the most important parts of a sexual relationship (something to keep in mind with some of his stranger or even outright wrong answers).

There are in fact only four sexual matters Dan Savage unconditionally disapproves of -- pedophilia (children cannot consent to sexual activity), scat (E. coli is no fun), necrophilia and bestiality (again, neither animals nor the dead can consent). So scat play with a dead kitten is a quadruple no-no.

Savage, openly homosexual, openly happy, openly healthy, openly comfortable with the human body and sexuality in general, openly qualified to actually use the English language correctly, has also shown himself to be a bit traditionalist regarding family and relationships, suggesting that his husband stay at home with their adopted child, and frequently blasting the bathhouse culture of anonymous sex that, among other things, led to the spread of HIV and the perception of AIDS as a gay disease. He has become something of a pundit as well, going on CNN and Bill Maher's program to push sex-positivity and same-sex marriage. Many shows (excluding Maher's) love to pair him with an anti-gay bigot, and watch the fireworks.

Savage is the founder of the "It Gets Better" project,[6] a campaign that encourages gay and transgender adults to tell young people that they are not necessarily condemned to face discrimination their entire lives; as they grow and develop new networks and connections, their situations can really "get better." On September 21, 2010, directly in response to the fifth child in four weeks to kill themselves because of bullying and harassment over their sexuality or perceived sexuality, Savage posted a YouTube video with his husband/partner, telling kids that "It gets better." A host of famous names added their own videos, from Ellen Degeneres and Chris Colfer, to the employees of Pixar and Google and the Chicago Cubs.

The project has come under fire from within the LGBT community for being ineffective at curbing self-harm and suicide - as well as from the fact that for many LGBT subgroups which aren't composed of white cisgender men,[7] it really doesn't "get better" and the project is out of touch with their intersectional realities.[8] The "Make It Better" project was founded by the Gay Straight Alliance shortly thereafter, and promotes active engagement to stop bullying and harassment rather than just accepting it.[9]

Savage has a definite problem with privilege blindness and generally being an asshole toward people who don't meet his normative standards (e.g. any of the letters after "LG" in the variants of "LGBTQA+"), and has a tendency to double down on certain comments when he's called out on them. He has suggested that gay people stay away from bisexual people when looking for anything longer-lasting than a one night stand;[10] his logic has to do more with jealousy and insecurity on the part of the gay partner than anything else.

He mockingly suggested Washington State Attorney General Rob McKenna was a trans man[11] (he's not). He seems to have been following a sort of "it's only an insult if the person in question claims to oppose it" logic, but that particular column just failed all around. Then he updated the post and apologized.

Savage's emotions have gotten the better of him and he has said some incredibly ballsy things, such as "I wish Republicans were all fucking dead."[12] For the record, we at RationalWiki don't wish for such a thing; we merely wish Republicans were sane and reasonable again for once, if not out of power.

Savage also believes that people on the asexual spectrum might want to think twice getting into romantic relationships with "normally sexual" people,[13] based on the logic that a major libido mismatch in a strictly monogamous relationship is a potentially major liability. On the flipside, he's also long held a "whatever works for you" attitude towards companionate marriages (those with love but little to no sex, or that are held together for other reasons), as long as both partners' needs are being met in an ethical manner.

He's also been criticized for his attitude towards bisexuals; he's evolved on that attitude over the years and currently takes the position that it's in the best interests of bi people to be out as bi[14] in order to raise visibility and reduce ignorance of what it means to be bi.

Savage, with the help of his readers, has added a few new words to the English language: