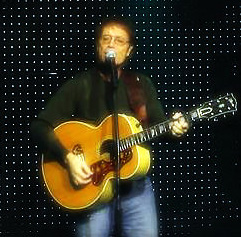 He is often referred to as "Harry Webb"" (his born name) by oldies.

The television show The Young Ones was named for one of his songs, and one of the characters, Rick, has an unhealthy obsession with Cliff.

Cliff's first remotely successful record in America, the only market that matters, was "Devil Woman", and his last was "We Don't Talk Anymore" just three years later. He reportedly had a couple of other hits since, but you have thirty seconds to think of one:

This belated and brief success in the American Homeland came two decades after he was England's most popular singer. As often happens with washed-up musicians who suddenly find their success has become past tense (see: Bob Dylan, Kansas), Cliff Richard appeared one day at a Billy Graham crusade to announce he had become a born again Christian, and always made a point of putting a couple "Christian rock" songs on the albums that followed. The misogynistic "Devil Woman" may have been one of those Christian songs since it warned against the dangers of loose wimmin and the occult. Since the mid-80s, his biggest hits in the UK have been the records aimed squarely at the churchgoing crowd - 1999's "Millennium Prayer" (his last number one hit) was actually promoted through the newspaper The Church Times.

Cliff Richard is also a notorious confirmed bachelor although he allegedly had a short affair with TV presenter (& ex tennis player) Sue Barker. He often attends Wimbledon Tennis fortnight and once led community singing during a "rare" rain break.