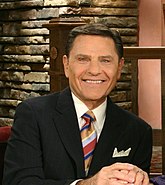 Those suckers paid for my plane, mwuhaha!

Kenneth Copeland (December 6, 1936–) is a televangelist and faith healer from Texas. His TV show is called The Believer's Voice of Victory and is featured on Paul Crouch's Trinity Broadcasting Network and many local TV stations. He teaches a theology he calls "Word of Faith", also called name it and claim it by critics. He has come under criticism for taking donations from cancer patients who believed his teachings that God would heal them as a result of donating, for leaving business partners in debt from a failed real estate venture, and for spending funds donated to the ministry on lavish personal vacations in his Cessna jet. He defends this by saying that commercial airplanes are filled with demons.[1]

Copeland Ministries have been accused of abusive Discipling and Shepherding that requires unquestioning obedience from members and Copeland has been described as similar to a cult leader. An oath of allegiance was required of church members. When a church employee's mother came out as a lesbian the daughter was told to stop considering her own mother as family. A dissident worker was shunned by former close friends.[2]

Mike Huckabee has uncomfortable links with Copeland.[3] Copeland also supports Donald Trump and participated in a lay on hands ceremony with him at Trump Tower in 2015, and currently serves as one of his most prominent spiritual advisors (along with Robert Jeffress and Jerry Falwell, Jr.)[4]

Kenneth Copeland Ministries' Eagle Mountain International Church (Newark, Texas), a megachurch pastored by his daughter, experienced a measles outbreak in August 2013 because many of the parishioners had followed Kenneth Copeland's teaching to rely on Dr. Jesus to keep them healthy rather than vaccinate. Oops… Kenneth Copeland Ministries then reversed their position on vaccination and the church began offering free vaccination clinics. In 2010, 3 years before the outbreak Copeland claimed he was shocked over how many vaccinations were advised for his grandchild while his wife stated that she and her husband needed no prescription drugs since, "the Lord heals all diseases".[5]

In 2020, he started using the COVID-19 pandemic as a strategy to peddle more of his bullshit, and hilariously tried to "destroy" the virus by blowing on it with "the wind of God."[6] Since the quarantines and social distancing made him start to lose revenue, he's been encouraging his followers to continue to attend church services,[7] even though this makes everyone involved, including himself, more susceptible to contracting and spreading the disease.