The Tea Party movement surfaced as a series of totally grassroots protests that were not in any way an attempt by FAUX News to use America's most abundant resource (dumb people) to fill some time during slow news days. Followers of the movement are affectionately called Teabaggers or Fucking Morons. Teabaggers themselves prefer the former.

The party name is stolen from the Boston Tea Party, which is so irrelevant to actual Teabagger demands that they could just as well have named themselves The Sonny Bono Pony Kristallnacht Marchers. 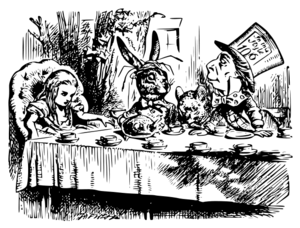 Sarah Palin (left), weeping due to learning that she's earning a mere $115,000 for spending an afternoon with the wingnuts. also pictured: Dick Armey (center) and Glenn Beck(right)

The Tea Party is a loosely organized protest group, sharing some common complaints. Their demands are varied, and in some cases spelled correctly, but their core beliefs and goals can be summed-up as follows:

Membership was originally flexible. In more recent times the groups have had to contend with Infiltration by parodists who pretend to be Teabaggers in order to undermine the Tea Party movement. Why anyone would do this is anyone's guess, since the help is hardly needed. Prospective members must provide evidence of the following:

New members, once they've been vetted and confirmed to be genuine, are taken before Glenn Beck. During ceremonies, often involving hundreds of people at a time, devices are implanted in to the heads of new Party members in order to allow a mixture of Beck's instructions and Sarah Palin's gutsy and quirky catch phrases to be fed directly in to the mind of the member. Should we drown Obama in a bucket? You betcha!

Ceremonial tinfoil hats are awarded to the acolytes in order to ensure they're not exposed to contradictory information.

For men, it kind of gets them out of the house, which is good since it gives the wife a chance to hoover under the sofa and contemplate starting a new life with someone who wears clothes that don't feature either the U.S. Flag or truck logos. Female members help disprove the notion that the world would be a saner and happier place if it was run by women. Kids will be able to share in the joy of collective hate from an early age, as well as learn about important priciples like frugality and environmental responsibility through practical demonstrations such as dumping whole crates of unused teabags into nearby bodies of water.