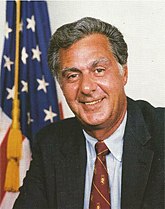 At ease, private.
Not to be confused with the dick army feared by wingnuts.

Richard Keith "Dick" Armey (1940–) is an American economist and politician. He was Republican Representative from the 26th Congressional District of Texas from 1985 to 2003, serving as House Majority Leader from 1995 to 2003. He worked closely with Newt Gingrich on the "Contract With America" during the "Republican Revolution" of 1994.

During his first month as Majority Leader, Armey referred to Barney Frank, who was openly gay, as "Barney Fag".[3]

As a member of Congress, Armey came out in favor of endless disastrous legislation. These laws included the Telecommunications Act,[4] which accelerated corporate consolidation in the media; the Defense of Marriage Act,[5] which set the Federal definition of marriage only between a man and a woman and allowed states to refuse recognition of same-sex marriages legal in other states; the Gramm-Leach-Bliley Act,[6] which repealed the Glass-Steagall legislation; and the USA PATRIOT Act,[7] which opened up a Pandora's box of authoritarian crackdowns on privacy and civil liberties.

Just before he retired, Armey became the primary sponsor of the Homeland Security act,[8] which brought us delightful agencies such as ICE and TSA. Finally, after being convinced by Dick Cheney that Saddam Hussein's family had al-Qaeda ties and he was developing nuclear weapons,[9] Armey voted for the Iraq War.[10]

Termed "the healthcare flap" by Politico[14] (explaining our above chosen headline), Armey was later forced to leave his position at DLA Piper as a result of the obvious conflict of interest, one the one hand, between Armey's clients there — supportive of health care reform as they were — and, on the other hand, FreedomWorks' epic struggle against Obama's socialist death panels.[15]