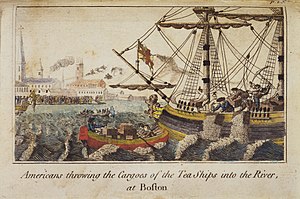 The Boston Tea Party (December 16, 1773) was an act of vandalism which has been highly mythologised into an act of democratic rebellion. The incident was led by Samuel Adams and other members of the Sons of Liberty, who thinly disguised themselves as Native Americans[1] and boarded ships of the British East India Company, dumping 342 chests of tea into Boston Harbor (thus making the tea undrinkable, even for Americans). However, this would have been acceptable if only the colonists had thought to pre-boil the ocean and add a splash of milk.

Bostonians and other colonists had been subjected to a tax on tea as well as paint, paper, and glass with the passage of the Townshend Acts in 1767.[2] Protests and non-importation movements by the colonists led to the repeal of the Townshend duties in 1770, with the exception of the duty on tea. In 1773, Parliament passed the Tea Act which allowed the struggling East India Tea Company to sell a half million pounds of tea in the colonies while bypassing the importation taxes normally paid under the British Navigation Acts. For all practical purposes, the 1773 Tea Act gave the East India Tea Company a monopoly by allowing them to charge less than other merchants.[3]

Despite the fact they were now paying less for tea, American colonists protested the act, not so much because they didn't like cheap tea, but because the tea was still taxed under the Townshend Act—which they opposed under the premise of "no taxation without representation"—the colonists were unable to vote in Parliament's elections. But Parliament had no problem levying taxes on the colonists, and strangely enough, the colonists didn't particularly like this.[4] Incidents like the Boston Tea Party were avoided in other port cities, when East India ships left without unloading their cargo in the face of protests by colonists. Massachusetts governor Thomas Hutchinson, however, issued an order forbidding ships to leave port without unloading their cargo, and this was a key factor that led to the Boston Tea Party.

It was during this period that coffee became the morning beverage of choice in the American colonies.

Due to much of the dumped tea washing up on the other side of Boston Harbor, on what is now Revere Beach, to this day one can buy small bottles of seawater with genuine Tea Party leaves floating around in them.

See the main article on this topic: Tea Party movement

In the early months of the Obama Administration as the President moved to stabilize the falling economy, semi-grassroots movements calling themselves "Tea Parties" sprung up across the United States in "protest." They adopted the backronym "Taxed Enough Already," heavily ironic since US taxes are at their lowest point since the Eisenhower era. In Cape Coral, Florida, the local Tea Party was denied a permit to peaceably assemble, which resulted in a great hue and cry on the Internet, but no civil disobedience.

King George III must be kicking himself in his grave, realizing now that he could have quashed the American Revolution simply by denying them permits. The movement spread and continued to exist in 2012, but after suffering some setbacks in the 2012 elections and fiscal cliff, has slowly fallen out of regard and drifts farther and farther to the far-right.