From RationalWiki
(Redirected from GDP)
Jump to: navigation, search

Gross Domestic Product (GDP) is a macroeconomic concept used to measure the total values of all goods and services produced by a country. Despite limitations, it is a fundamental tool in understanding economics.[1] 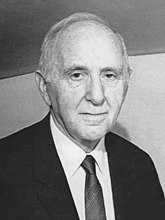 Estimating the total output of a nation or region is not new. In the 1600s Sir William Petty made early attempts to aggregate different aspects of the British economy. Over the centuries as economics and statistics became more disciplined and formalized better measures were developed.[2] In the 1930's economist Simon Kuznets made several estimates of the national income of the United States for Congress to ascertain the depth of the Great Depression. In the mid 1940s Gross National Product(GNP) was developed and used as an important tool in managing, understanding, and harnessing national resources for the war effort.[3] Over the rest of the 20th century measuring national income become more standardized and has been adopted by most nations and a number of international bodies. In 1991 the United States switched from measuring GNP to GDP.

GDP measures aggregate spending in a domestic economy. It is an expenditure approach to measuring national income, meaning it accounts for purchases.[note 1] The basic calculation is as follows

Where C refers to consumption, I to investment, G to government, X-M to foreign trade, and Y to final output.[4]

There are some important aspects of what is not included in most measures of national output.

Consumption, or "C", refers to the type of normal household spending most people engage in. Clothing, food, electronics, and medicine are all parts of consumption. In developed nations like the United States consumption often comprises the largest share of GDP.[11]

Investment(I) refers to spending undertaken by firms. Investment can be thought of as spending intended to produce more output later, or deferred consumption. A factory owner may forgo his or her current consumption and install new equipment that produces more output, yielding a higher income for even more personnel consumption later. In addition to new equipment, inventory is also included. In developing nations like China investment often takes up an enormous share of national income.[12]

Government spending in an economy is referred to as "G" and represents purchases made by the state. Government spending is typically a mixture of consumption and investment. During recessions Keynesian economists often advocate increasing G to offset declines in C and I.

The foreign trade of an economy, or "X-M", measures the impact of international trade. X, meaning exports, are thought of as supporting domestic employment. M, or imports, are seen as supporting foreign employment. If a nation has a trade deficit, the effect of X-M on GDP will be negative. 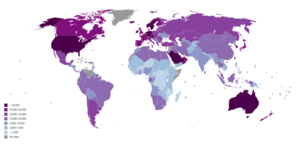 There are some slight, but important modifications often made to GDP.

Where NGDP is nominal GDP, P is the price level, and RGDP is real GDP.

The miracle of compounding returns. 2% growth vs 3% over 100 years.

GDP levels are important but so are growth rates. There are two main ways to calculate GDP growth.

Nominal GDP of different nations in 2014. 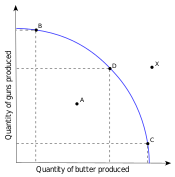 The production possibilities frontier curve. Point A is well below full capacity.

GDP is a crucial tool in assessing the economic health of a nation. Most references towards economic growth are referring to GDP. As an indicator of economic success, it plays a vital role for both monetarists and Keynesians in assessing the performance of macroeconomic policies. Falling GDP is often accompanied with unemployment, deflation, and declining consumption. In the United States the Congressional Budget Office measures if the economy is at, exceeding, or below capacity.[17] Essentially they want to see if GDP is as high as it could be with all resources fully mobilized. The production possibilities curve is another way in which economists conceptualize if an economy is operating up to its potential. GDP has a number of postive attributes that make it popular.

A number of prominent institutions keep estimates on GDP for different nations.

Starting in the late 1980s and early 1990s economists and governments began moving away from GNP and towards GDP. GNP refers to Gross National Product, a concept similar to GDP.

GNP refers to the total output of a nation and its citizens, so output that takes place outside its borders is included while production associated with foreign firms within its borders is excluded. Using this measures a nation like the United States, with enormous amounts of foreign investment, has a higher GNP than GDP. A developing nation like Vietnam, which hosts a large amount of foreign investment, but with little of its own, would see that its GNP is smaller than GDP.[22] Because of the rapid increases in globalism in the early 1990s with the fall of communism and opening of improved international supply chains, measuring domestic output is generally seen as a better measure of welfare.[23] Some institutions still keep track of GNP, although it has largely fallen out of favor.

GDP has been criticized by a number of people, including some economists. Criticisms often point to over reliance on GDP and aspects of human welfare it doesn't measure.[24] Most economists recognize the deficient aspects of GDP and use a number of variables when grading economies.[note 4]

Things Not Measured By GDP[edit]

Critics of GDP have argued for heavily modified versions of it or completely different measures of welfare. Amongst many, these include the Human Development Index, OECD Better Life Index, Genuine Progress Indicator, and Gross Sustainable Development Product. While these indexes may have certain advantages over GDP, most are much more complicated and require keeping track of many different variables to compute.

Some people have gone beyond pointing out GDP's limitations and accused it of being an essentially meaningless indicator.[25] This often includes heterodox economists, such as those associated with the Austrian school. In general, because of its correlation with things like health, longevity, and education, most mainstream economists are hesitant to simply reject it.