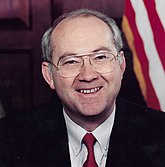 I fucked you all and I'm lovin' it!

Phil "Mental Recession"[1] Gramm (1942–) is a former Democratic and Republican Congressman and Republican Senator from Texas, and former economic policy advisor to John McCain's 2008 presidential campaign. In 1996, he ran for the Republican presidential spot, and finished 5th out of three. His is currently a high ranking member of the criminal gang financial giant UBS.

Gramm authored the Reagan tax cut that brought about mourning in America and boasts of writing the Reagan defense budget that destroyed the Soviet Union and ended the Cold War.

Gramm was at the very core of manufacturing both the Enron disaster and the Great Recession. (Marx couldn't have had a better wet dream.)

His economic policies can best be described as a libertarian, due to his claim to have extreme hatred of all government regulations. He has said in the past that government regulation of the economy is "akin to communism." That didn't distinguish him a lot as Senator, or stop him from being McCain's economic adviser.

Whether he experienced cognitive dissonance for wanting to fund NASA is something we might never know.[2]

When Gramm switched from Democrat to Republican, it caused a furor in his family. His grandmother said it wasn't the yankees who burned down her house in the Civil War, it was the Republicans.

As a major contributor to Gramm's political machine, Enron was able to have the Senator, with his power as Chairman of the Senate Committee on Banking, make some modifications to the Commodity Futures Modernization Act of 2000 (CFMA). The bill was passed during the final month of the Clinton administration and contained, among other things, Enron's request for legal certainty with regard to certain futures and derivatives transactions.

Enron's Washington weasel lobbyist summed it up nicely in an email to the home office on the eve of the bill's passage: "...you are no longer subject anti-fraud and anti-manipulation as contained in Sec. 107 of the House passed legislation. This would be good for us."[3] This exemption from government regulation and public disclosure allowed the sociopaths at Enron to commit fraud on a grand scale. By coincidence, Senator Gramm's wife, Dr. Wendy Gramm,[4] enjoyed a seven-figure salary as a board member at Enron during these heady days.

When Enron could no longer conceal its criminal behavior, it collapsed, becoming the largest bankruptcy in US history. More than 20,000 employees lost their jobs, their retirement savings and their children's college funds. Enron's accounting firm, Arthur Andersen, was also found dead at the scene.

The Enron loophole was only part of the double-whammy of stupidity Gramm unleashed on the financial markets. In 1999, he helped engineer the Gramm-Leach-Bliley Act, which repealed parts of the Glass-Steagall Act of 1933. Specifically, the provision separating commercial banks, investment banks, and insurance agencies was erased, which allowed banks to get into stocks, bonds, and all sorts of exotic financial instruments and ultimately gave us financial black holes deemed "too big to fail" like Citigroup.

Gramm then decided that banks just didn't resemble casinos enough. In addition to his Enron loophole, Gramm pushed for barring any regulatory oversight of credit default swaps (CDS) and got a provision doing so placed in the CFMA. The CDS was characterized as an important financial "insurance" instrument, however, in operation, it was much closer to naked short selling, aka securities fraud.[5] Nevertheless, the CFMA enjoyed bi-partisan support and was hailed as a law that would allow for great new "financial innovation" that would keep us "competitive in the global market" (though Warren Buffett referred to them as "financial weapons of mass destruction"[6]). Gramm, and most others, didn't blink when the CDS market grew to twice the size of the stock market.[7] (By coincidence, shortly after passing the legislation, Gramm took up the position as Vice-Chairman at investment bank UBS.)

Gramm then told people to stop whining right before the shit really hit the fan in fall of 2008. By the time the inevitable economic downturn happened, banks the world over were saddled with massive debts that most have written off, and the main mortgage lenders in the US, Freddie Mac and Fannie Mae were nationalized, leaving US taxpayers a potential $200 billion bill. The fallout continued when investment bank Lehman Brothers filed for Chapter 11 bankruptcy protection in the US, and rival Merrill Lynch, no longer confident of its own financial position agreed to be taken over by Bank of America to the tune of $50 billion.

Millions of people around the world are now unable to get credit, due to loss of liquidity in the money markets, hence the term, and so the consumer-led economies of the West are facing a downturn.

Phil Gramm remained an unofficial economic advisor to John McCain as late as 2008, and possibly later.