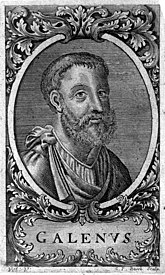 Galen of Pergamon, latinized as Galenus (129 CE–c. 200?) was an ancient Roman physician and philosopher and early anatomist who remained highly influential until the early modern period. Born in modern Turkey to well off Greek parents he was a polymath who grew up studying philosophy, medicine, math, and logic. Much of his early life was also devoted to experimenting on and dissecting pigs and monkeys.[1][2][3] 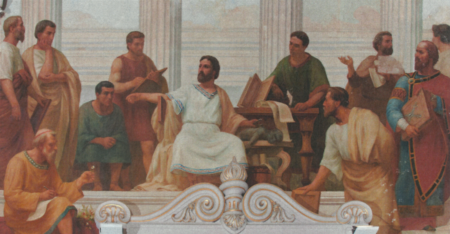 The son of a wealth Greek architect, Galen studied math, philosophy, and medicine in his youth. He studied and advocated exercise and good nutrition to improve and maintain health. Eventually he more devoting himself to anatomy, but always regarded himself as both a philosopher and a physician. He spent some time as a successful doctor for gladiators in Asia minor. During the later portion of his life he made detailed accounts of the The Antonine Plague, which has been identified as a smallpox outbreak that left millions of Romans dead.[4]

Galen regarded anatomy as the foundation of medical knowledge, and he frequently dissected and experimented on animals like the Barbary ape, pigs, sheep, and goats. A strong advocate of dissection as a way of forwarding surgical precision, Galen was often hampered by formal bans on dissecting human corpses. His work distinguished seven pairs of cranial nerves, described the valves of the heart, and observed the structural differences between arteries and veins. One of his most important demonstrations was that the arteries carry blood, not air, as had been taught for 400 years. Notable also were his vivisection experiments, such as tying off the recurrent laryngeal nerve to show that the brain controls the voice, performing a series of transections of the spinal cord to establish the functions of the spinal nerves, and tying off the ureters to demonstrate kidney and bladder functions.

He wrote many works of logic and ethics, and also addressed those and other philosophical questions—especially of epistemology, causation in the natural world, and philosophy of mind—in his medical-scientific writings. He pioneered a kind of critical empiricism in his attempt to explain the natural world.[5]

Galen remained one of the most revered and cited figures in human anatomy and medicine until the early modern period. Though much of his work is now antiquated, he was very much an early pioneer of the scientific method.