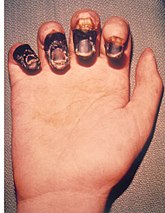 It is a close relative of Y. enterocolitica, which causes the much less serious disease yersiniosis

and usually comes from not washing one's hands after contacting uncleaned or improperly cleaned chitterlings.

The term "plague" was also used historically to refer to any epidemic of disease. These are caused by germs; a fact that has been known since the late 19th century and the validation of the germ theory of disease, which, like evolution, is not a hypothesis but rather demonstrated fact on the order of the theory that rain is caused by clouds. 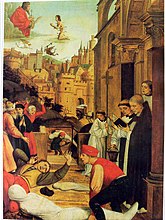 The Plague of Justinian

Some Christian fundamentalists persist in suggesting that when others experience outbreaks of disease, that this is a punishment from God, much like the plagues visited upon Egypt; Jerry Falwell said this of the AIDS epidemic among gays,[3] roughly following Fred Phelps's line.

They do this despite the fact that their congregations are filled primarily with elderly people who suffer an epidemic of diseases of excess such as artheriosclerosis. Hypocrisy is, ironically, one of the vices most detested by Jesus according to Biblical accounts (Matthew 23:1 is one famous example). Even more ironically, Jesus also spoke against people who ascribed natural disasters to God punishing their victims (Luke 13:1-3).

Interestingly the Bible actually gives a relatively accurate account (for the Bible) of the bubonic plague itself in 1 Samuel 5:6-14 where it mentions a plague of tumors and rats which ravage the Philistines after they gained possession of the Ark.

Biological warfare is an unfortunate fact of modern life. According to the Westboro Baptist Church, deaths experienced by US combat soldiers at the hands of the Taliban are God's punishment to America for abandoning "Godly ways". Thus, a hypothetical Taliban biological terrorist attack would be, according to such fundamentalists, a plague from God, and Al-Qaeda would be the vicars of the Lord.

This biology-related article is a stub.
You can help RationalWiki by expanding it.
Retrieved from "https://rationalwiki.org/w/index.php?title=Plague&oldid=2284320"
Categories:
Hidden categories: