From RationalWiki
(Redirected from Math)
Jump to: navigation, search 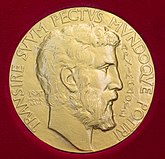 The Fields Medal carries a portrait of Archimedes, one of the greatest mathematicians of all time.

Mathematics can be understood as the study of formal systems and the relationships between them, although no definition has been universally agreed upon. The main branches of mathematics are algebra, geometry, number theory, topology, analysis, logic, probability and statistics. Mathematics is a fundamental truth, and when done correctly is impossible — for rational people — to deny, which is to say that mathematics is also one of the few aspects of life where absolute proof is considered possible. For example, the only way to deny that 1 + 1 = 2 is to use a definition of "1," "2," "+," or "=" that is not commonly accepted[2]. Alternately, add two entities of different units, say one meter and one apple.

Mathematics is a mainstay of engineering and science and is important in everyday life in general. While some may regard mathematics as an "exact science", this is not correct. Mathematics is a formal science, concerned only with abstract structures, their properties and the logical relationship between them. Ontology — comparing theoretical calculations with empirical observations — is the bridge between mathematics and the sciences.

The reader is invited to test their environment: take a look at your surroundings and try to spot something, where no mathematics at all has been used. This includes judging felled trees (how was the axe made?), sown fields (how was the sowing calculated?) and so forth. Lava fields, eroded mountains and other purely natural phenomena are there without the aid of mathematics, but everything man-made is likely to be grounded in it.

Despite being incredibly important, no Nobel Prize is awarded in the field of mathematics (some claim that Nobel's wife ran off with a mathematician, though since Nobel was never married, this seems unlikely[3]). The poor mathematicians have to be content with the much less prestigious (to non-mathematicians) Fields Medal. On the bright side, there are no awards in other fields equivalent to the Millennium Prize Problems, which are a set of seven mathematical problems each with a one million USD reward for the first published solution. You'd better get to work, as one has already been solved[4]!

A few fundamental statements in mathematics, known as axioms, are not proven and are instead assumed to be true. One cannot remain within a formalism and question the validity of the axioms on which it stands. One thing about axioms in mathematics (and other logical endeavors) is that they are always stated up front. It is always interesting to see what structures can be built by discarding some of them, such as in non-Euclidean geometry.

It must be mentioned that mathematical symbols, which so often scare people, are just shorthand. Every mathematical formula can be written in natural language. Of course, even simple equations would be very cumbersome written that way.

A subtle flaw in a mathematical argument can often be drawn into an absurd conclusion; see mathematical fallacies for some examples.

A subject which is interesting to many are the so-called mathematical pathologies. For lack of better see the Wikipedia article Pathological (mathematics)

. An example not covered there is Gabriel's Horn

- phenomena of this kind tend to have colorful names as well.

If the beginning reader wishes to familiarize themself with mathematics, the best advice is probably: take a look at the For Dummies series. Despite the name, the books are mostly very useful and aren't really intended for dummies. They aim to give a beginner a background in the field, well explained and often very well written.