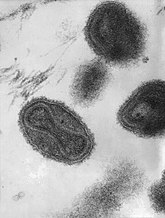 Smallpox, also known as variola, was an infectious disease caused by the variola virus, a member of the Poxviridae family, and characterized by high fever and aches with subsequent widespread eruption of pimples that blister, pustulate, scab over, and leave scar tissue behind. It gets its name to distinguish it from the "great pox", today known as syphilis.[2]

Smallpox came in two forms. The least dangerous was called variola minor or alastrim which produced a relatively mild infection and had a death rate of approximately one percent. The more serious form of smallpox was called variola major which can present in several ways. The most common presentation of variola major was called classic ordinary smallpox where a patient endured the symptoms listed above. Other, more serious presentations of smallpox included flat smallpox and hemorrhagic smallpox where the victim bled excessively rather than forming pustules. Flat and hemorrhagic pox were usually fatal, though as a whole variola major had a mortality rate of approximately 30%.

Smallpox genocided the native Americans. However, Europeans had smallpox epidemics with fatality exceeding 90% and there was no reason natives would have higher mortality than Europeans.[3] 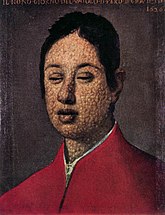 Though the exact origins of smallpox are unknown, variola major likely jumped species from cows or other domesticated animals at least 3000 years ago.[4] The first major suspected outbreak of smallpox is the Plague of Athens in 430 BCE, though there were likely earlier cases. Pharaoh Ramses V, who died in 1157 BCE, is believed to have died from smallpox.

A physician inspects the growth of cowpox on a milking maid, c. 1800

Connecting the survival of smallpox infection and immunity, the practice of inoculation began to be exercised during the 18th century, although the practice can be found dating back to 1000 AD in India, Western Asia, and China.[5] Those that could afford to be inoculated would intentionally introduce either pus from a smallpox victim or ground smallpox scabs into their systems. Because of the low dose of infectious material, this would cause a mild case of the disease, but render the individual generally immune to future cases of smallpox. However, if done improperly, inoculation would result in extreme infection.

In 1796, observing that individuals who contract cowpox become immune from smallpox, Edward Jenner, a British physician, inoculated a young boy with cowpox and then challenged his immune system with smallpox. Although a challenge trial with a potentially fatal disease would be considered unethical by modern standards, Jenner was correct in his observation and accomplished the first vaccination of smallpox.[6] Over the course of the 19th century many western countries embarked on mandatory vaccination programs and succeeded in eradicating smallpox within their native populations.

The smallpox vaccine is manufactured from the vaccinia (cowpox) virus, and is the best available protection against smallpox infection, although there have recently been attempts to develop anti-viral medications. Smallpox vaccine (aka cowpox infection) is not without its issues. Because it is a live-virus vaccine, it cannot be administered to individuals who are immune-compromised, or women that are pregnant or breastfeeding. The vaccine also causes severe reactions in people who have ever had any type of skin condition, particularly eczema. In all, the vaccine has a severe complication rate of 1 in 1000, with side effects ranging up to death in approximately 1 case per million.[7][citation needed] By contrast, the disease itself had a death rate of about 300,000 per million; a significant part of that million will infect other people, while vaccinated individuals do not transmit the disease. And yet some people still say the vaccine wasn't necessary and shouldn't have been used.

Jenner predicted shortly after his initial trial vaccination that smallpox would eventually be eliminated as a threat to humanity. Although many western nations had achieved mandatory vaccination programs, other countries could not afford the expense. As early as 1958, the Soviet Union called for the eradication of smallpox by a volunteer effort. Beginning in 1967, the World Health Organization began a world wide vaccination campaign with the purpose of eradicating smallpox. The last natural case of variola major occurred in 1975, and the last natural case of variola minor in 1977.

Following the eradication of smallpox, an accident occurred in 1978 resulting in the death of a British journalist. Based on this accident, all samples outside the control of the CDC, and the Soviet Ministry of Health were ordered destroyed. Despite subsequent calls for the destruction of the US and Russian stocks, they are still kept as the last remaining official stocks of smallpox samples.[8]

Despite the existence of these official stocks, defectors from the former Soviet Union have alleged that the Soviet military commissioned the development of smallpox as a biological weapon in the 1970s and 1980s.[9]

Conspiracy theories that smallpox might still exist in stocks outside of the former Soviet Union and the USA have led to serious media dealing with the plans "in case of smallpox outbreak" during the Iraq War. Ultimately Saddam's smallpox were as hard to find as his other weapons of mass destruction.