From RationalWiki
(Redirected from Gaslight)
Jump to navigation Jump to search

The word came from the stage play Gaslight,

wherein an abusive husband turns off lights while denying he is doing so, so as to make his wife feel insane to the point where she is psychiatrically committed, so he can steal her inheritance.

Gaslighting is a form of unhealthy psychological manipulation wherein the abuser attempts to manufacture thoughts or feelings of mental instability in the victim.[1] The abuser may do so unconsciously, or so as to destabilize the victim, make them feel upset, induce delusional states in them, and/or exercise control over them. The National Domestic Abuse Hotline considers gaslighting a form of serious abuse.[2]

Schizophrenia-like symptoms that previously did not exist have been shown to be induced by professional psychiatric treatment.[3] Psychiatrist Theo L. Dorpat argues that this is widespread in clinical settings due to some medical professionals having authoritarian attitudes or wanting to exercise social control over their patients.[4] 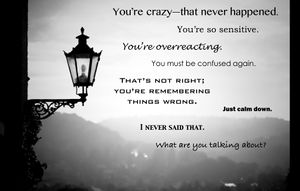 The most commonly cited gaslighting tactics abusers use were outlined by Patricia Evans and include:

Although gaslighting as an abuse tactic is not questioned by anyone except extreme sociopaths and narcissists, it is true that some people claiming gaslighting may not be experiencing gaslighting. Theoretically, they may instead by experiencing a real delusion not induced by an abuser. At the same time, some prominent anti-psychiatrists such as David Cooper

claim all serious cases of non-drug-induced persistent delusions are caused by interpersonal abuse or neglect, particularly from authority figures such as parents.[7]