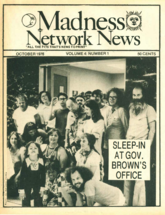 Anti-psychiatry is a broad collection of people, governing bodies, and movements who have shown opposition to a defining aspect of psychiatry. They may oppose psychiatry as a whole, oppose involuntary detention and psychotropic drug administration, oppose the idea of mental illness, or may simply oppose the state of psychiatry at the time of their writing.[1][2] Many anti-psychiatrists do not self-identify as such or reject the label.

Psychiatry is claimed to be the only medical field with a consistent opposition dating over 2 centuries.[3] However, it emerged as cohesive, large, self-identified movement later in the 1960s.[4] The term anti-psychiatry was coined by British psychiatrist David Cooper who was himself anti-psychiatry, and published Psychiatry and anti-psychiatry in 1972.[4]

Elizabeth Packard
See the main article on this topic: Feminism

Anti-psychiatry has evolved for different reasons. For example, Elizabeth Packard

and other women’s rights activists in the late 1800s criticized asylums as ostracizing women who did not want to be mothers.[1]

demanded improvements in shabby state hospital conditions more than a century ago and generated anti-psychiatry sentiments in other formerly institutionalized persons.[5] Although, Clifford did believe in mental illness and started the mental hygiene movement, which sought to improve the standard of care for those deemed mentally ill.[6]

in the 1920s and psychoanalysts Jacques Lacan and Erich Fromm based their anti-psychiatry on self-professed secular humanism.[3]

Sigmund Freud, though an MD himself, was largely against the medicalization of psychoanalysis, stating:[7]

The 1940s also saw opposition to the mental hospital model still used today. The mental hospital's separation of patient and doctor were deemed cruelly paternalistic, dehumanizing, and ineffective by some, including Maxwell Jones most prominently. Maxwell wanted psychiatric hospitals to become more communal, what he called, "social psychiatry". Particularly, he advocated for doctors and patients to live together and co-create individualized therapy models. This occurred at his ‘therapeutic community’ at Belmont Hospital in the late 1940s.[8] The communal live-with-doctor approach to mental hospitals, something which has never become standard in psychiatry, began as a starting point for many psychiatrists who went on to be dubbed anti-psychiatrists.[4]

See the main articles on this topic: Lobotomy and Electroconvulsive therapy

The rise of the asylum/mental hospital, from 1841 on saw a number of highly controversial practices institutionalized in psychiatry. Practices such as bloodletting, cold water immersion, forced spinning whilst strapped to a chair, and insulin shock therapy. Most of these were discontinued by the 1940s although insulin shock therapy was widely used in the 1940s and 1950s. Practices such as electroconvulsive therapy (ECT) and psycho-surgery such as lobotomies (severing the pre-frontal cortex of the brain with a sharp tool, often inserted into the eye socket) were also used widely in the 1940s and 1950s.[9] ECT and psychosurgery continued after the 1950s and are still used today (deep brain stimulation e.g.), however with much less fanfare.

"Sick society" rather than "sick patients"[edit]

published a number of works extremely critical of psychiatric practices and to a large extent, psychiatry as a whole. Laing held the view that what psychiatry deems, "mental illness", is an understandable or sometimes rational, individual strategy to protect against a, "sick society".

Laing most notably promoted the notion that schizophrenia was caused by nurture rather than nature. Laing devised a concept of schizophrenia that was never made standard in psychiatry, that the schizophrenic is psychotic because he puts up a 'false-self' to protect himself from undesirable social positions. Positions such as pretenses, elusions, collusions, injunctions and untenable positions.[11]

Michel Foucault and Laing's influence would later bring a radical leftist element into the anti-psychiatry camp.[13] His positions on schizophrenia were shared by a small but vocal minority of psychiatrists for a short period of time.

The man who coined the term 'anti-psychiatry', David Cooper

Cooper believed further that schizophrenia was born primarily from those who reject domestic abuse and a "harmful" system of morals that he argued some families impose on children, as he wrote in The Death of the Family. Those that reject the abuse are then labeled 'deviant' or 'schizophrenic'.[14] This shows that Cooper bought into some degree of mental illness denial, or more specifically, social deviance denial, otherwise called Social Labeling Theory, first described in Becker’s Outsiders (1963).[15] Social labeling theory argues that no behaviour is inherently deviant, but it is the reaction of others that determines whether it is deviant or not. Cooper and Laing overall believed in the existence mental illness, but others did not.

and Foucault analyzed psychiatry as an extra-judicial form of social control. He saw psychiatry as societal confinement for "undesirables", or a regulation of employment[16][17][18] that he thought was largely unwarranted.

Psychiatry as "gaslighting the poor and excluded"[edit]

also saw psychiatry largely as social control. He saw psychiatry as a tool of harm by its use of social exclusion. He thought that most people labeled 'mentally ill' were simply just miserable from being poor rather than from any 'brain disease'. While the term 'gaslighting' was not in wide use then, he essentially saw psychiatry as gaslighting the poor and creating illness in those already socially excluded. He saw any form of any mental hospital as the ultimate example of harmful social exclusion which he argued creates mental illness in the first place.[19] The Italian Parliament for a time was anti-psychiatry and passed Basaglia's Law later in the 1970s, which closed down all psychiatric hospitals, not on the basis of individual abusive practices, but on the idea of the psychiatric hospital not being helpful in any form, and the community care seen prior to the mid-1800s as more helpful.[20] The law was eventually overturned in a sense, but its effects are still felt in Italy today.

Ken Kesey's book One Flew Over the Cuckoo's Nest also came out in 1963, which influenced popular perceptions of psychiatry. Later anti-psychiatry texts would draw on his book as a foundation. 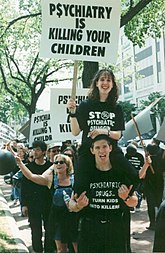 Scientology anti-psychiatry protesters
See the main article on this topic: Church of Scientology

In 1969, psychiatrist Thomas Szasz, while not himself a Scientologist, joined forces with Scientology to form the Citizens Commission on Human Rights.[21] An organization which never left its Scientology roots and is used by proponents of psychiatry to strawman anti-psychiatric groups that are not associated with Scientology.

Szasz in 2010
See the main article on this topic: Thomas Szasz

Thomas Szasz most notably rejected the idea of mental illness as a whole. Specifically because he felt psychiatry had failed to show that their diagnoses had a physical basis, with the medical rigor expected of professionals to diagnose, that showed a demonstrable alteration in function. He held that the term 'mental illness' was flimsy and that psychiatry should only label 'mental illness' as demonstrable brain diseases and non-brain-diseases. Szasz further argued that a patients civil liberties were more important than his self-protection and urged psychiatry to give patients the level of choice to avoid life-saving care they can already do legally through self-discharge the emergency room for non-psychiatric illness for example.[22]

In 1973, the Mental Patients Union formed in London as a reformist group that believed in mental illness. They demanded 24 rights, some of which have since been granted to psychiatric patients, but most have not. Included in the list were a demand for an end to compulsory hospitalization, an end to involuntary treatment in general, an end to treating mental illness as incurable, an investigation into organizations that treat mental illness as incurable, and the right to their own belongings and clothing.[24] They also saw psychopathy in particular as not a valid diagnosis or legal idea.

Gay activists were heavily involved in anti-psychiatry protests, though most were simply opposed to the inclusion of homosexuality in the Diagnostic and Statistical Manual of Mental Disorders (DSM) and not to psychiatry as a whole. Gay activists actually crashed a number of American Psychiatric Association meetings until homosexuality as a disorder was taken out of the DSM in 1973. It was taken out as a result of the protests and the new research into sexuality like that of Evelyn Hooker

The movement itself, while smaller today due to widespread deinstitutionalization and commodification of mental health services, has been united in recent years with the advent of the internet.[26]

Notable subsets or overlapping movements of anti-psychiatric thought that continue today include:

There is also a small strain of mental-illness denial among the nuttier libertarians due to Szasz's involvement in the Libertarian Party and the Soviet Union's use of the mental-health system to lock up dissidents.[37]

Self-described involuntary celibates are among the most rabid anti-psychiatric collections of people in the 21st century. It does not seem to matter if they are organized or not, nor does it seem a top-down 'teaching' like in Scientology or cults, but almost all self-described incels seem to express anti-psychiatric sentiment. They claim psychiatry actively ignores their concerns regarding dating and instead gaslights them or abuses them. In other words, they feel psychiatry does not acknowledge their difficulty in finding dates in an abusive, "victim-blaming", or grossly neglectful way. Many also express that psychiatric treatment has made their health much worse. An incel political party stated that it takes its anti-psychiatric stance from writings of Franco Basaglia.[38]

Some radical queer activists such as Gay Shame maintain an anti-psychiatry stance, a position that was otherwise dropped by most of the gay-rights movement long ago when the DSM de-listed homosexuality as a disorder in 1973. They maintain that too much of the psychiatric establishment is still largely discriminatory towards non-heterosexuality, and exercise psychiatry in favor of their biases.

has a long history.[39] Originally starting out as part of the deinstitutionalization of the 20th century.

Back then and today, discharged mental hospital patients often are left with nothing and have to cope with homelessness or addictions to prescribed drugs. "Freak-out centers", were started in the 1960s as a place for those discharged to eat and commiserate. These freak-out centers are now known as "drop-in centers" but no longer have any formal connection to anti-psychiatry. Nowadays, they are mostly used by homeless people not involved in psychiatry, while often set-up in local government buildings that service discharged mental hospital patients.

The psychiatric survivor movement still exists, with the largest group being the World Network of Users and Survivors of Psychiatry (WNUSP). Modern groups, like past groups, focus on the negative effects of mental health drugs and campaign against involuntary psychiatric detention.

WNUSP has Economic and Social Council consultancy status at the United Nations.

See the main article on this topic: United Nations

In 2017 the Center for the Human Rights of Users and Survivors of Psychiatry submitted information and arranged for United Nations Working Group on Arbitrary Detention to meet with users and ex-patients of psychiatry in Washington, DC and in San Diego, CA.

Emily Sheera Cutler coordinated the meeting between a group of survivors and the WGAD in San Diego.[40]

The end result was the United Nations Working Group on Arbitrary Detention in a treatise directed toward the USA that it prohibited the forced psychiatric treatment in the USA that has been enshrined into American law, creating a division between the UN and US law.[30]