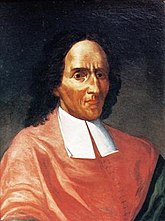 Giambattista Vico (23 June 1668–23 January 1744) was a major Italian philosopher of the Enlightenment (or Counter-Enlightenment, depending on who you ask). His most well-known work is the 1725 Scienza nuova (in English The New Science), and he is sometimes called the "first constructivist" because of his novel position that the truth itself is constructed by society (often summarized by his famous formula verum esse ipsum factum, "the truth is precisely what is made"[2]). Some thinkers, like Isaiah Berlin, believe that Vico inaugurated the philosophy of history as we know it. Unfortunately for his modern readers, Vico writes in a very obscure style, leaving his work wide open for divergent interpretations: this was probably deliberate, because of the stranglehold held by the Inquisition over radical thought in Italy at the time.

Vico came up with a wide-ranging philosophy of how civilizations develop. According to him, the ideal trajectory of civilizations begins in a divine age where government is dictated by divine authority, then develops into a heroic age governed by legendary monarchs and feudal aristocrats, before finally evolving into a human age where humans are recognized as equal, democracy is the prevailing mode of government, and rationality is idolized (for better or for worse). These stages cycle according to the rise and fall of individual civilizations.

There are a lot of references to "divine providence" in Vico's work, and he claimed to be writing a refutation of "modern philosophers" including Spinoza, which has led some of his interpreters to view him as an 'anti-modern' writing in defense of Catholicism. The problem with this account is that Vico hardly ever mentions the Bible or Christianity, and when he does it's only in strange non sequiturs. One example is when he affirms that sacred history shows that the world is much younger than the chronicles of other civilizations presume, and then immediately asserts that this is a "great proof" that sacred history is true, with no further supporting arguments. By contrast, "divine providence" can also be read as referring to a collective will that pushes human development in particular directions, and which cannot be reduced to individual people, identifying Vico as a kind of social historian.

Vico's work was fairly obscure and was not lauded in his own time, but he later became a major influence on Marx and the radical left, and significantly influenced the development of modern historiography. He is now recognized as one of the most significant philosophers of the early Enlightenment.