The regressive left is a term coined by anti-Islamist activist Maajid Nawaz[2] to describe a perceived segment of the left which defends certain reactionary and anti-feminist attitudes in the name of 'tolerance'. Nawaz originally used it to refer to misguided leftist tolerance of conservative and fundamentalist Islam (underbelly and all) in contrast to their progressive stance against the scourge of conservative and fundamentalist Christianity, but the term has since been extended to encompass many (but curiously not all) leftist positions that appear contradictory to progressive values.

Whilst the original purpose of the term was to challenge supposed progressives' failure to stand up for progressive values where Islam is concerned, the term has also been adopted by centrists, conservatives and other rightists as a snarl word directed at any leftist positions they don't happen to like, similar to the snarl usage of the term "social justice warrior". As is to be expected, rival camps revel in the infighting of their opponents.

As a real, actual problem within the left[edit]

The concept of a reactionary left originated when cultural and moral relativism left the postmodernist lens of academia and entered popular political discourse.[6] The concept most people define as "multiculturalism" today is the secular idea of cultural pluralism combined with this new, politically active relativism. Since relativism is a neutral academic stance, applying it to current political or ideological positions raises problems. A relativist observer holds that there is no objective standard by which one culture or moral system can be measured to be better than another. This position (if held absolutely) logically entails that liberal values such as free speech and equal rights are not objectively better than a rejection of them.[7]

So what happens when a conflict involves a disadvantaged group that not only does not support, but actively opposes progressive values such as tolerance of sexual identity or gender equality? For the "relativist progressive", there are three possible courses — they can abandon relativism and advocate for change in all groups, even if it means placing pressure on already disadvantaged groups; they can reserve their criticisms for the dominant group alone by employing a tactical form of relativism which only applies to marginalized groups, in extreme cases even shielding the disadvantaged group from criticism as it continues to oppress others; or they can simply insist no value can be known to be better than another and wing it according to whatever trendy movement is popular with them at the moment. The latter two options are by some described as "the regressive left." Some liberals, such as Natalie Reed, argue postmodernists can avoid the pitfalls of relativism, and take firm positions on issues across social and cultural boundaries.[8]

Those on the regressive left think that the concept of cultural pluralism raises difficult questions about how progressive liberals should act in a pluralistic society. How should a feminist criticize patriarchy, while also being mindful that some disadvantaged groups have a patriarchal culture? How should an atheist take a strong position against religion, while also recognizing that minority religious groups are marginalized in society? For anyone with half a brain, of course, the answer is simple: Having your beliefs and values criticized in no way amounts to being oppressed.

Conservatives and other reactionaries usually use the term as a snarl word. Most of them are just looking for a way to attack liberals for not sharing blatantly racist or xenophobic viewpoints, or otherwise trying to direct social malign onto disadvantaged groups.[10]

They are generally easy to spot with a litmus test as to whether or not they actually agree with any of the criticisms leveled against these liberals. For instance, a fundamentalist Christian holds strikingly similar views to a fundamentalist Muslim. There is no reason for said Christian to support feminist, atheist, or other social criticism of Islam. The only possible motivation for Christian conservatives to support such criticism is racism and/or religious intolerance—or, at best, to redirect the conversation away from Christianity.

Some liberals have been accused of using the term to mask reactionary attitudes, in particular New Atheists such as Ayaan Hirsi Ali, Richard Dawkins, and Sam Harris. According to some, their views are Islamophobic with regard to racial profiling, restricting Muslim immigration, expressing concerns about Muslim demographics[11] and justifying preemptive wars, among other far-right attitudes (ironically, shouldn't this make them the "real" regressive leftists?). Some also use it as a snarl word to deter/silence any criticism of Western foreign policy or of contributing factors to religious fundamentalism, such as the failure of secular nationalism, poor economic conditions, etc. Such "liberals" use the term to hold on to questionable opinions while still calling themselves liberals, by calling actual progressives the "regressive left." This is a form of Jonanism, the belief that everybody criticizing you belongs under one ideological tent. The idea is that other liberals are really conservatives in disguise, thus introducing an appeal to motive and shutting down discussion.

Public figures who love to use this term, such as Sam Harris (who wrote two articles literally titled "In Defense of Torture" and "In Defense of Profiling") certainly don't seem to have a problem with holding "regressive" beliefs.

In late November of 2015, secular activist and former Muslim Maryam Namazie was invited to give a speech at Goldsmith University by the University's Atheist, Secularist and Humanist Society. During the speech, Muslim students heckled her, up to the point of turning off her projector and the lights in the room.[13][14] Namazie also received death threats during the speech.[15] The students were eventually asked to leave by campus officials.

A silver lining is that, incidentally, this gave her speech a wider audience than it would otherwise have gotten. However, after the incident, the Goldsmith Islamic Society condemned Namazie, and the local Feminist and LGBT societies released statements expressing solidarity with the Islamic Society.[16][17][18][19] A society that itself hosted a speaker that advocated the death penalty for apostasy.

The incident was quickly condemned by secular groups, who decried the feminist and LGBT societies for silencing Namazie — a lone minority woman — and siding with violent Islamists instead.[20][21][22][23][24] 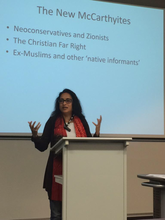 During a speech at the University of Bath, Deepa Kumar, a professor of Middle Eastern studies at Rutgers University, put up a slide which listed 3 categories described as "New McCarthyites," which included "Ex-Muslims and other 'native informants'." Pictures of this slide, taken out of its context, attracted negative attention in the easily rilled-up blogosphere.

Kumar explained that her comments were taken out of context, and stated on twitter that she was not referring to all ex-Muslims, but rather to "a particular group which is closely tied to the far-right."[25] Indeed, reactionary groups do have a tremendous soft spot for recruiting self-loathing minority group members.