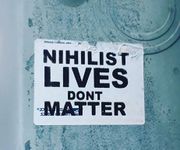 Nihilism is the philosophical belief that life and the universe have no meaning. In general, nihilists are considered to be wanton hedonists since their life has no meaning, yet the concept is also commonly associated with the opposite extreme of suicidal depression.

Classical Russian nihilism concerned itself primarily with trying to destroy pretty much everything (because nihilism here meant "annihilating" everything old, so it makes way for the new way). Things would start over ex nihilo, from nothing... supposedly. In reality it was a philosophical and socio-cultural movement against the socially extremely backward Czarist Empire at an age of secularism and growing religious apathy. For the Russian nihilists, the term meant the complete destruction of an antiquated, oppressive world that in their view could not be reformed without being destroyed. Their references were the French Revolution and French early socialism, British utilitarianism and German materialism.

For some reason, despite the number of atheistic philosophies that still find purpose and joy in life, many religious people consider nihilism the logical extension of atheism. This is despite the fact that the most eloquent expression of nihilism is actually found in a holy book:

"Ve are nihilists. Ve care nuttink for your pain!"

On the other hand, secular atheists, particularly intellectuals and philosophers, have also thought of nihilism, in the sense of 'urge to destroy indiscriminately' as a precursor to Nazism and totalitarianism,[2] probably because they are evocative of images of unethical practices and wholesale atrocities. But these were carried out in the name of social, political and racial purposes, i.e. in the name of moral values like race or class. No historically attested totalitarian is known to have had nihilistic views in the philosophical sense. Quite the opposite. It is reasonable to think that such views would be highly counter-productive to their power and the moral beliefs underlying it.

Søren Kierkegaard was one of the first modern philosophers to discuss nihilism. He posited a philosophy of nihilism known as leveling, -- a process of suppressing and removing individuality to such a point where an individual lacks the traits that make him unique. Without being an individual, life and one's very existence becomes void of any meaning. This philosophy is not the fully developed nihilism that was to come because Kierkegaard believed leveling created a life without meaning or value, but that life itself has inherent meaning and value.[3] Modern nihilism, beginning with Nietzsche, would claim life has no inherent meaning period. If however nihilism is defined as the doctrine of negation in reference to religion of morals then Marquis de Sade, Julien Offray de La Mettrie or Max Stirner deserve the label just as much as (if indeed not more than) Nietzsche.

But Nietzsche remains the philosopher most popularly identified as a nihilist and the first philosopher popularly thought of when nihilism is mentioned. He generally describes nihilism as "a condition of tension, as a disproportion between what we want to value (or need) and how the world appears to operate." Nietzsche, however, is mainly associated with the philosophical statement "God is dead", which holds that the Christian God is no longer a viable source of any moral principles, therefore leading to a rejection of an objective and universal moral law, with a lack of moral basis ultimately turning into nihilism. However he also states that with God out of the way, human creative abilities could fully blossom and without turning an eye toward a spiritual realm, humanity could begin to acknowledge the value of the world. Nietzsche was thus not a nihilist himself (at least in his later years) but rather dedicated to combating nihilism, which he feared was overtaking the West. He is usually identified as an existentialist. In fact, both he and Kierkegaard are sometimes labeled the "father of existentialism" though obviously they had very different positions, especially on Christianity.

However, other modern-era figures that could be called 'nihilists' too like Machiavelli, Thomas Hobbes, David Hume or Albert Camus have distinct positions as well. As such nihilism cannot unequivocally be connected with a single person unlike most philosophical schools of thought and is not very useful when it comes to grouping different thinkers. Its rarity and looseness as a doctrine is perhaps due to an innate 'senselessness' or 'meaninglessness' or its flirtations with philosophical irrationalism and just plain irrationality. Or it could be due to a certain supra-historical dimension reflecting the social domination throughout history of value-based systems of thought, religious or otherwise.

On an unrelated note, nihilism is not just the most ludicrous or comical but the most metal and 'grim' and 'brutal' of philosophies, being propounded by both Toki Wartooth and Skwisgaar Skwigelf. ANUS (American Nihilist Underground Society) is also one of the first heavy metal databases (founded back in 1987), who like to use big, complex words to daze the reader into believing they are accomplished intellectuals, as well as finding ways to draw correlations between nihilism and any metal band whatsoever.[4] Making Sense? Ha!

When taken to extremes, one can then state that life itself is meaningless, and that everyone around them is meaningless, you can then justify murder or suicide based on the fact you think all morality has no meaning. Luckily, most nihilists do not go to this extreme.