Golgi bodies, the Golgi complex or the Golgi apparatus, named after the Italian biologist Camillo Golgi, are composed of numerous sets of smooth cisternae, which are coated with lipid membranes. Each disc-shaped cisternae forms a structure that resembles a stack of plates, called a Golgi stack. The Golgi complex contains a great number of vesicles. These vesicles are used to send molecules to the cellular membrane, where they are excreted. There are also larger secretory vesicles, which are used for selective excretion.

The Golgi is principally responsible for directing molecular traffic in the cell - nearly all molecules pass through the Golgi complex at some point in their existence. The sorting is mediated by the vesicles. When proteins bind with their appropriate receptor on the vesicle, they are encoated in the vesicle and transported away.

The Functions of the Golgi Complex[edit]

What types of secretion are controlled by the Golgi complex?[edit]

The Golgi complex controls trafficking of different types of proteins. Some are destined for secretion. Others are destined for the extracellular matrix. Finally, other proteins, such as lysosomal enzymes, may need to be sorted and sequestered from the remaining constituents because of their potential destructive effects. This figure shows the two types of secretory pathways. The regulated secretory pathway, as its name implies, is a pathway for proteins that requires a stimulus or trigger to elicit secretion. Some stimuli regulate synthesis of the protein as well as its release. The constitutive pathway allows for secretion of proteins that are needed outside the cell, like in the extracellular matrix. It does not require stimuli, although growth factors may enhance the process.

The important role of the Golgi Complex is to make certain the plasma membrane proteins reach their destination. 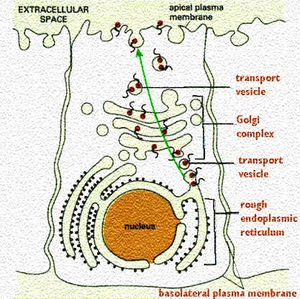 This figure shows the route. Note that the orientation of the protein is maintained so that the region destined to project outside the cell (a receptor binding site, for example), ends up in that place. In order to do this, it must be placed so that it faces inside the vesicle.

The Golgi complex is compartmentalized. Phosphorylation occurs in the Cis region. In other regions, different types of carbohydrates are added as a glycoprotein passes through the cisternae. This figure illustrates the different regions where sugars like mannose (man), galactose (gal), etc are added. The final sorting is done in the Trans Golgi complex.

The functional differentiation of the Golgi complex can be studied with the electron microscope with specific techniques that detect enzymes. The cis region is rich in lipid-bearing membranes and can be delineated by osmium tetroxide labeling. The middle regions label for enzymes that add carbohydrates or other groups on the product. The inner, or Trans region, is the area where the lysosomes are sorted. Therefore, it is heavily labeled for acid phosphatase.

There is much interest in understanding how the different Golgi cisternae are organized and differentiated. A number of models exist, however a favorite is called the "Maturational model" [1]

The Maturational model suggests that the new vesicles from the ER enter the cis Golgi network and retrograde vesicles (bearing COPI) coats move to merge with the cis region cisternae. These carry Golgi complex processing enzymes and their targeting to this region may be dependent on the low concentration of these processing enzymes. Then, as processing continues, the middle cisternae contain more mature product and lower amounts of the enzymes needed in the beginning. Finally, the trans region is specialized for sorting, containing receptors to sort and isolate lysosomal enzymes, for example.[2] 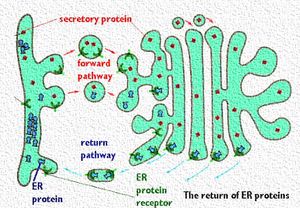 Golgi bodies are known as the mailroom of the cell. Golgi bodies identify any substance and delievers it to the part of the cell that needs it the most. They receive those materials from the endoplasmic reticulum.