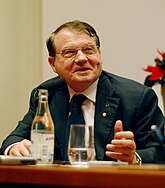 Oh, how the mighty have fallen.

Luc Montagnier is a French virologist and Nobel Prize co-winner for his joint discovery of the Human Immunodeficiency Virus. He is the co-founder of the World Foundation for AIDS Research and Prevention and co-director of the Program for International Viral Collaboration.

Unfortunately, Montagnier has pulled a Linus Pauling in his old age and become a big supporter of homeopathy.

In 2009, he conducted an "experiment" on diluted DNA in which he purported the DNA emitted an electromagnetic signal after it diluted down to nothing.

He used his laptop and a cheap amp to experiment, so it's 99.9% certain that he just picked up some white noise.

Nevertheless, woo-meisters like Deepak Chopra and Dana Ullman have held this up as a vindication of homeopathic "theories" since Montagnier has become something of an outspoken apologist for homeopathy after he conducted this "experiment". If a Nobel-winner says it, it must be true!

The fact that the effect lasts a few picoseconds has not been reproduced by other scientists, was self-published without peer-review, and according to Montagnier, the research "cannot extrapolate it to the products used in homeopathy".

Apparently, his homeopathic infallibility does not extend to knowing the applicability of his own research.

Claiming the virus was engineered[edit]

Montagnier claims that the DNA of autistic children emits abnormal electromagnetic radiation. He was present at Autism One with such notable kooks as Andrew Wakefield, Jenny McCarthy, and Operation Rescue.[1]

This pseudoscience-related article is a stub.
You can help RationalWiki by expanding it.