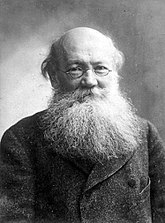 Pyoter Alexeyevich Kropotkin (Russian: Пётр Алексе́евич Кропо́ткин, occasionally romanized as Pioter, Peter, Bread Santa, or even "stinky P" Kropotkin) (1842–1921) was a Russian zoologist known primarily as one of the primary thinkers of anarcho-communism. Kropotkin was an outspoken opponent of Social Darwinism, drawing on research performed in Siberia to argue that altruism was an evolutionary advantage. His notable books include The Conquest of Bread[note 1] and Mutual Aid: A Factor Of Evolution, which both proposed an equal role for cooperation as opposed to competition alone in driving evolution, and Fields, Factories, and Workshops, which includes a repudiation of the ideas of Thomas Malthus[1] and comes across rather optimistic about the prospects for technology improving industrial and agricultural output, leading to economic decentralism and local self-sufficiency. Kropotkin advocated communal living and a gift economy and argued for the abolition of money and written law.

Kropotkin had an uneasy relationship with the "mainstream" Russian communist movement and ultimately rejected the Bolsheviks, claiming after the Bolshevik seizure of power that "This buries the revolution",[2] and said this demonstrated "how the revolution was not to be made — that is, by authoritarian rather than libertarian methods." Due to his popularity, the Bolshevik regime permitted Russian anarchists to march -and even carry anti-Bolshevik banners-in a funeral procession for him. It was the last free assembly in Russia until 1987.[citation needed]

This history-related article is a stub.
You can help RationalWiki by expanding it.
Retrieved from "https://rationalwiki.org/w/index.php?title=Pyotr_Kropotkin&oldid=2245630"
Categories:
Hidden categories: