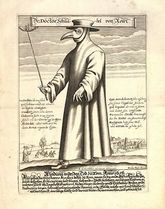 Swine flu refers to any influenza virus which infects pigs; while most of these do not infect humans, occasionally a strain of flu can be transmitted between humans and pigs (compare also avian flu, where the same thing can happen with a flu virus between humans and birds).

The term commonly refers to the H1N1 pandemic which first broke out in Mexico in May 2009 and ended officially in August 2010.[1] This was originally believed to be swine flu but has since been renamed novel flu because it contains a reassortment of swine, avian, and human flu virus material (and not because it would make a good book). It was also at first called Mexican flu or Mexican swine flu, then just swine flu, although the pork industry objected to calling it swine flu on the grounds that this may discourage the consumption of pork.[2][3] (Except fiction writers, maybe?) In any case the "swine flu" name has stuck, much to the chagrin of pigs everywhere.

During the 2009 Pandemic, among the variety of responses suggested included avoiding taking mass transit, canceling vacations to both Mexico and the United States, wearing N95-rated dust masks in public, cancelling school classes for a week or more, and other hysterical responses; and of course it is the latest excuse for cranks to promote their pet causes, ranging from "we're all gonna die" doomsday scenarios to selling colloidal silver.

Very hysterical, or very stupid people, laughably thought that eating pork products would infect them with swine flu. This was such a common misconception that the CDC actually addressed it in their FAQs about swine flu,[4] while many people proceeded to mock the uninformed idiots without mercy.[5][6]

In Egypt, the swine flu epidemic was used as an excuse to order the slaughter of all the nation's pigs; this was widely considered a backhanded attack on the country's minority Coptic Christian population, who owned all the pigs in question, since the majority Muslim population believe them to be haraam (religiously forbidden).[7] Ironically, this ended up backfiring, as the pigs were fed with organic wastes, and without them the concentration of wastes on Egyptian streets increased.

Up to the time of the 2009 outbreak, there had been 3 major flu outbreaks: the most serious was the 1918 "Spanish Flu" immediately after World War I which actually first broke out in the United States, not Spain, and eventually took the lives of between 50 and 100 million people around the world.[8] The other two were in Asia in 1957 and 1968 and took about 1 million lives each. For further perspective, ordinary influenza takes around 36,000 lives in the U.S. alone every year.

Swine flu also refers to the 1976 "outbreak" that never was, but which led to the U.S. government embarking on a program to vaccinate the entire U.S. population. This was called off after 25% of the population was vaccinated and no flu outbreak occurred. Vaccine hysteria promoters point to the 1976 vaccinations, and the small number of people who suffered adverse reactions[9] (which is normal for any vaccine) as an indictment of vaccination in general, which is just bullshit as the threat of suffering adverse reactions from diseases like mumps and polio is far greater if one is not vaccinated than the extremely small likelihood of an adverse reaction to the vaccine — but it does call into question the wisdom of rushing into drastic action when it is unclear what, if any, threat there actually is.