The term grandfather clause is used to describe an exception to a rule or law because something has been around for an arbitrary period of time, technically defined as "long enough" — sufficient to exclude it from compliance with the law. Exemptions may be indefinite or for limited periods of time to allow exempted things to be brought in to compliance.

A grandfather clause may be introduced if the modification or introduction of new laws would create an unreasonable burden on those who lived prior to the changes being implemented. In the United Kingdom, holders of driver's licences were allowed to drive busses and coaches of any size, and with changes made to restrict this in 1992, holders of licences issued prior to the change were still permitted to drive busses and coaches providing they'd driven such vehicles prior to 1992.[1] Other examples are commonly found in the introduction of regulation, such as building codes, that would be impractical to implement in the case of historical buildings. Although it'd be nice to have wheelchair access to the crown of the Statue of Liberty, it may not be practical to require that the National Parks Service install an elevator.

In the United States, at least, there is also an earlier, uglier usage of the term. After the Civil War, some of the former Confederate states added "grandfather clauses" to their voting rules — someone could vote in an election, if his grandfather had voted in an earlier election. This was a tactic to disenfranchise freed slaves, since almost no former slaves' grandfathers had ever been able to vote.

Christmas scientists believe that a grandfather clause is a guy who delivered presents once a year until his back gave out - leading him to hand the business over to his son. 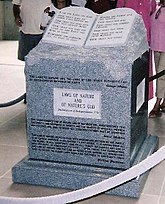 In Alabama, the cement was still wet.

In 2005, the Supreme Court of the United States heard a case regarding a Ten Commandments monument that had been installed in the grounds of the state capitol in Austin, Texas. The court ruled that the monument could remain — the justification being that it had been around for a long time and that no-one had complained earlier.[2] The court was not specific in stating how long people must wait before their unconstitutional monuments become legal, but certainly it's clear that proponents of the Establishment Clause should not wait for the cement to dry before lodging their complaints.

It is fortunate that the same judges were not ruling on the right of women to vote. The same logic employed would suggest that women should spend less time complaining and more time providing beer and sandwiches to the boys as they discussed the merits of the candidates.