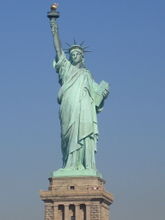 The Statue of Liberty is one of the most famous icons of the United States, along with Mount Rushmore and the Grand Canyon.

The monument itself stands at over 90 metres, half of which is the statue itself, half being its base.

The statue was given by France in 1876 as a birthday gift to America to celebrate their centennial of independence from the British (with whom they both have a historical enmity), and it now stands at Liberty Island and symbolizes concepts such as freedom, democracy and, indeed, liberty.

The statue remains a popular tourist attraction to this day despite its liberal connotations.

A few idiots wanted to ship the statue back to the French in 2003, around the same time those people started calling those fried potato things freedom fries. This would have destroyed a national icon out of pure spite.

The Libertarian Party has adopted the Statue of Liberty as its symbol, conveniently forgetting that this big government statue was donated by socialist France and is maintained by the communistic National Park Service with our tax dollars. Whoops.

There are claims of a connection with the freemasons or Knights Templar.[1] Frédéric Auguste Bartholdi, the sculptor, and Gustave Eiffel, the engineer, were both freemasons, but it's unlikely they intended the sculpture to enforce masonic authority on the US, or whatever conspiracy theorists think a masonic-built statue could do.

In March 2017 the statue fell dark for a few hours. There were a lot of imaginative theories about this. It was interpreted as a protest for International Women's Day or against Donald Trump's restriction on travel from Muslim countries to the US. Or maybe the Russians hacked it.[2]

Conservative Christian conspiracy theorist Mark Dice and theforbiddenknowledge.com claim that the Statue of Liberty was designed by French Freemasons and is secretly meant to represent Lucifer.[3] Which just goes to show how easily you can (re-)interpret a bit of symbolism.