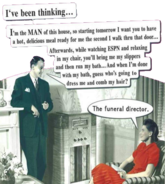 Reaction to proposals of "Kinder, Küche, Kirche".
Sorry, were you looking for the other KKK?

Kinder, Küche, Kirche (Children, Kitchen and Church) is a German expression denoting the role of women in society. Allegedly first used by Kaiser Bill (Kaiser Wilhelm II: 1859–1941, reigned 1889–1918), it was also promoted by the Third Reich, although with less emphasis on the "Kirche."

It is remarkably similar to the role recommended (though not demonstrated) by Phyllis Schlafly and, by extension, the Eagle Forum and Conservapedia. It is the antithesis of second-wave feminism, if not the antithesis of modern civilization, and is not espoused [sic] in enlightened societies today.

Today, it is commonplace for women to enter the workforce, but as recently as the 1980s, Nancy Reagan was criticized for meddling in public affairs.[1]

In the German school system, the school day generally runs from 8 a.m. to no later than 2 p.m. with most schools ending their day by 1 p.m.[2] (Elementary schools often let out at 11:30 a.m.). In the past, a number of German schools had no food service, so students had to leave campus to eat.[3]

After all, if you release hordes of hungry Kinder in the early afternoon, it's best that Mutti be waiting at home for them (in the Küche!) so she can fix them their lunch.

This sexuality-related article is a stub.
You can help RationalWiki by expanding it.
Retrieved from "https://rationalwiki.org/w/index.php?title=Kinder,_Küche,_Kirche&oldid=2436860"
Categories:
Hidden categories: