From RationalWiki
(Redirected from Heinlein)
Jump to navigation Jump to search 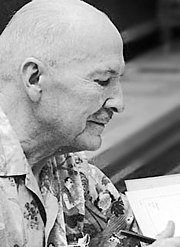 Robert A. Heinlein
One can judge from experiment, or one can blindly accept authority. To the scientific mind, experimental proof is all important and theory is merely a convenience in description, to be junked when it no longer fits. —Robert A. Heinlein, The Past From Tomorrow (1967)

Robert Anson Heinlein (pronounced: [Hine-line]) (1907–1988) was an American science fiction author who was known as one of the "Big Three", alongside Isaac Asimov and Arthur C. Clarke.[1] His contributions to science fiction include the novels The Moon is a Harsh Mistress, Stranger in a Strange Land, Red Planet, Starship Troopers, and Rocket Ship Galileo, and the short story All You Zombies.

Heinlein's life is reflected in his various works. Born in Butler, Missouri, Heinlein embraced the frontier ethos of self-reliance, risk acceptance and skepticism but rejected the irrationality of "Bible Belt" religiosity and misplaced moralizing in many of his novels, such as Revolt in 2100, Glory Road and Stranger in a Strange Land. His other influences came from the deep feelings of loyalty and service instilled in him during his time at the U.S. Naval Academy. However, his tenure in the military was only five years (quite short for an officer), when he was released from the service due to tuberculosis; he was ruled partially disabled and received a small government pension and retained the use of Veterans Administration healthcare for the rest of his life.

As World War II struck, Heinlein returned to the military as a civilian contractor in the Philadelphia Naval shipyard, bringing along an old friend, Isaac Asimov, to help him. During their time there, Asimov once complained he was unable to get anything down after even five re-writes of the story. Heinlein, shocked by the revelation, turned to Asimov and asked, "You write it more than once?" Asimov later detailed this exchange in his SF collection Gold, in one of his essays on writing; it was a bit of a wheeze on Heinlein's part, as he seems to have written several draughts of many of his works.

Heinlein had married Elinor Curry while still at Annapolis, not announcing it as it was against the rules of the Academy; the marriage did not last very long. After a shaky relationship with his second wife, Leslyn MacDonald, who both had become alcoholic and was dissatisfied with Heinlein's rules for the 'open' marriage. These basically boiled-down to its being open for Heinlein, who wished his co-worker Virginia Doris Gerstenfeld to live with them, but not for her. Heinlein filed for divorce in 1947, and he and Virginia were wed the next year, and would remain married for the rest of his life. She became one of his main inspirations for powerful female characters, and the archetype is often used in many of his stories, notably Friday, Glory Road, and the autobiographical Tramp Royale. Virginia acted as Heinlein's "first reader," reviewing his work before it was submitted to the publishers, and took an active role in his business affairs. She also appears to have had an impact upon his political beliefs, which moved rightward (his For Us, the Living, 1939 – no relation to Ayn Rand's We The Living – appears to advocate democratic socialism, for instance).

In 1950, Heinlein was credited as one of the main contributors to the film Destination Moon, which earned him an Academy Award for Special Effects. It was after this that he began to pen his juvenile series, a series of books geared towards younger readers of science fiction. Heinlein reasoned that the then-ongoing Baby Boom would lead to the opening of many new public schools equipped with libraries that would need to be stocked with books deemed suitable for the young, which he decided was an opportunity for him both to earn a steady living and to influence the rising generation. Through his publisher Scribners Heinlein released some of his most beloved classics, including Red Planet and Have Space Suit: Will Travel.

During the late 50's and early 60's, the Heinleins became politically active with the founding of the Patrick Henry League in 1958, as well as working on Barry Goldwater's staff in 1964. Asimov, a long time friend of Heinlein, attributed this to his wife in his autobiography, I, Asimov. It was during this time that Heinlein released what would become some of his most known novels, with Starship Troopers in 1958, Stranger in a Strange Land in 1961, and The Moon is a Harsh Mistress in 1966. In 1960 he reported from the Soviet Union, promoting an early version of a lost cosmonauts theory.[2]

As the years progressed, Heinlein's health became worse. In the 1970's, he was stricken with peritonitis that nearly killed him. He remained active, however, and travelled the globe with his wife. Sadly, his health problems finally caught up with him in 1988 and he died of congestive heart failure.

Many view Heinlein's work as some of the most definitive in science fiction, and many of his novels are still in print and read by millions to this day. Among his works, Stranger in a Strange Land, the tale of a human raised by Martians, is viewed as a groundbreaking work in the subjects of sexual liberation, self importance, and religions. It introduced "grok" to the English language. Many practitioners of polyamory like to use this novel to explain some of their viewpoints on their practice. The founders of the Neopagan religious group Church of All Worlds have openly stated that their group was inspired by the fictional religion mentioned in the novel. [3]

Starship Troopers, although receiving heavy criticism when it was first published, a time when the insectoid enemy was understood as a reference to East Asians (the Japanese in the Second World War in the Pacific and the Chinese in the Korean War), later become a literary symbol of duty, service, and the necessity of an armed force. Starship Troopers has received an unprecedented amount of treatment, being made into a live-action film[note 1], an animated series and a video game. The story itself has also contributed much to the world of video games, most notably the Halo, StarCraft, and Tribes series. Other works it influenced include the movie series Alien, various works of literature, a song by the progressive rock band Yes and tabletop gaming, such as Warhammer 40,000. Starship Troopers described a militaristic society in which only those who have served in the military (or other government service involving personal sacrifice) have the right to vote, because they are the only members of society who have been willing to risk their lives to defend it. Some of its other content remains controversial: aside from suffrage contingent on federal service, the support of capital and corporal punishment and militarist, even fascist ideology (allegedly, but not really). Heinlein also seemed to really dislike social scientists, especially Dr. Benjamin Spock, the famous child psychologist who made a then-revolutionary change in disfavoring spanking. The novel also featured the use of powered armor suits that soldiers wore which increased their strength a shitload by amplifying the magnitude and power of the soldiers' movements. The book is also on the Commandant's Reading List, a list of suggested books and stories to read for members of the US Marine Corps. It is on the list partly because the method of attack used by the Mobile Infantry in the book is similar to (and may even have inspired[note 2]) the method of attack used by the US Marine Corps since the 80s.

The Moon is a Harsh Mistress, which is about a future revolution on a lunar colony mirroring the American Revolution, is considered a libertarian classic. This is somewhat strange because two subjects that play a significant role in the book are carrying capacity and overpopulation (the famous acronym "TANSTAAFL" - There Ain't No Such Thing As A Free Lunch - introduced by the book was as much about ecological carrying capacity as it was about laissez-faire economics), both of which most libertarians these days are in denial of.[note 3] Also featured prominently is a computer that has become sentient, a popular scare-topic in 1960s sci-fi (see also HAL 9000 in 2001: A Space Odyssey), but bucking that trend by becoming friends with and helping the main trio. Libertarians claim the Professor Bernardo de la Paz character was based on real-life libertarian theorist Robert LeFevre, and it is likely Heinlein learned of LeFevre through his involvement with the Goldwaterites in 1964,[note 4] but the extent to which the Professor was based on LeFevre is in some question because Robert LeFevre was a pacifist; Professor Bernardo de la Paz, whose goal is to deliberately incite interplanetary war over the fate of the lunar colony, is decidedly not.

The novella If This Goes On... (later combined, along with two other novellas, Coventry and Misfit, into the novel Revolt in 2100), tells of a man named Nehemiah Scudder, a backwoods preacher who soon becomes the President, then the dictator of America. Through him, the nation's government is destroyed and replaced by a government handled by "The Prophets", a series of theocratic rulers who work to destroy scientific progress and thought in the name of God. The series it belongs to, known mostly as the "Future History" series (although Heinlein was uncomfortable with the name), was revived in 2006, with Spider Robinson's Variable Star, a novel based on Heinlein's unpublished notes.

Heinlein's 1953 collection/novel Revolt in 2100 is a direct warning of the authoritarian potential of religion, especially Bible Belt Protestantism and Mormonism.

Time Enough for Love is the quintessential expression of Heinlein's questioning of cultural mores. In this book, the main character travels back in time to his own childhood years and has sex with his mother. He also relates a tale of twins who were engineered to be able to have children with no more genetic risk than two strangers, which they do, and live as husband and wife. Another story is about how he adopted a little girl, and when she grew up, they got married. Even today, all this would be pushing the envelope.