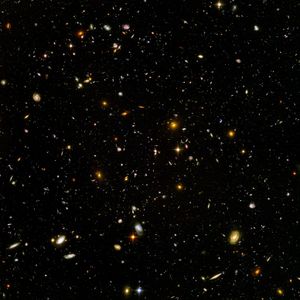 Space is big, really big, big enough to contain every random and senseless plot you can conceive of.

Science fiction may take place in a futuristic setting, alternate universe (including a novel planet, culture, society, etc.) or involve a plot-driving idea somehow related to science, or an extrapolation thereof. It took off in pulp magazines in the early 20th century, after a few 19th century precursors (H.G. Wells and Jules Verne, for example). Interestingly, a book from 2nd century Roman Greece entitled "True History", which features among other things, aliens and space travel, has been cited as the earliest known work that could be categorized as "science fiction".[1]

In the popular perspective, "sci-fi" is blended with, and even assumed to be part of, the "fantasy" genre, within the umbrella of speculative fiction. Science fiction is typically divided into two schools: hard science fiction and soft science fiction, however what defines either is very vague. It is generally accepted that there is a "sliding scale" of hardness rather than something just being simply "hard" or "soft," although sometimes the terms hard or soft science fiction means whatever people want them to mean, and you'll rarely see much consensus except in obvious cases such as Star Wars ('"soft") and 2001: A Space Odyssey ("hard"). Science fiction is also often distinguished by setting, such as alternate reality, cyberpunk, military science fiction, etc. Many fans of science fiction literature (and certain authors) don't like using the term "sci-fi" to refer to serious works in the genre, preferring instead "SF."

Science fiction is typically divided into two over-arching genres: hard and soft. Neither term is considered pejorative in the general sense, just a demarcation of the two general styles (think 2001: A Space Odyssey vs. Star Wars). Hard science fiction generally explores ideas generated from actual real ("hard," or serious) science, theoretical or not, and how people might deal with such situations. The "big three" of science fiction – Heinlein, Asimov, and Clarke – often tried to write stories that did nothing more than project or extrapolate real science, usually into a hypothetical future. This is the definition that some fans use when praising scientifically interesting works and says nothing about presence or lack of "literary" quality or the existence of themes other than science. Another definition of hard science fiction has also been used as a somewhat derogatory term[2][3] to define science fiction that focuses more on accurate scientific data than on literary devices such as character development. Indeed, some hard science fiction fans consider focus on characters and their relationships and personal experiences to be of little use to the story. In this definition, scientific accuracy alone is not enough for a work be lumped into the hard science fiction genre, and focus on technical scientific details over everything else is a must. This definition refers to works where instead of science being a means to an end, the science is the end. Less commonly, the term may be used to define any work that has a hard focus on scientific detail, even if the science is not completely within the realms of possibility. An even less common definition is "science fiction based on hard sciences (physics, chemistry, etc)." Utopian and dystopian stories may use the extrapolation of academic social sciences and real world politics, but they are typically not considered hard science fiction without additional STEM focused elements.

Soft science fiction is even less rigorously defined, and its definition is the subject of much debate and controversy within the community. When taken to simply mean "science fiction that's not hard," it is the most common form of science fiction seen in all forms of media. Soft science fiction include works that either have little or no focus on the science aspect of the story, instead focusing on plot, character and/or action and adventure, or works that do focus on the science, but science that is mostly fictional. Devices such as faster-than-light travel, instant teleportation and time travel are often used. Adventure/exploration tropes and themes such as "good versus evil" are relatively common. There may also be considerable overlap with fantasy (in such cases it is generally regarded as "science fantasy"). Star Wars (arguably science fantasy), Dr. Who, and Back to the Future are examples of works that fall into the softer end of science fiction. Rarely, the term soft science fiction may also sometimes be used pejoratively to purely mean works that are all style and no substance, with focus on little more but spectacle and entertainment, no matter how realistic the actual scientific devices are. Some of the more "literary" science fiction writers generally dabble into the softer areas of science fiction, focusing on the issues presented by the new technology, and how the characters are affected by it, rather than just using them simply as plot devices. Some of the more popular authors of the kind include Philip K. Dick, Gene Wolfe, Jack Vance, and Ursula K. Guin. More satirical/humorous works (The Hitchhiker's Guide to the Galaxy, Futurama, Red Dwarf, Fallout, etc.) also tend to fall into soft science fiction. Science fiction video games also tend to lean soft, since a video game is usually judged on immersiveness and presentation, neither of which requires strict scientific rigor.

Some science fiction writers try to synthesize hard and soft science fiction if they want to include "soft" elements while writing an overall "hard" story by introducing plot elements that present-day scientific understanding either does not allow or allows in only theory, but trying to explain said elements in a rigorous, internally consistent way that does not explicitly contradict present-day science, and keeping the rest of the story as hard as possible. FTL travel (usually explained either via wormholes as in Interstellar, or through applications of as-yet-undiscovered exotic matter as in Mass Effect) and truly sentient artificial intelligence (as seen in Ex Machina) are two common features of stories like this.

Much of science fiction has a social message. George Orwell's 1984 was primarily intended as a satire, but was dressed up as science fiction. Bradbury's Fahrenheit 451 played with information control techniques as had been tried with varying degrees of success in totalitarian regimes. And then there's Philip K. Dick, who experimented with every kind of society in his fiction. Ursula K. LeGuin also wrote science fiction novels with social themes, including feminist themes. Modern near-future science fiction (William Gibson, e.g.) often depicts corporations ruling the world, whether overtly or covertly, whereas far-future science fiction is often virtually anarchistic, using the assumption of ultra-cheap power and total information availability (Iain M. Banks, e.g.) as justification. The precious spice in Dune, which is found only on Arrakis and mined amid terrorist attacks from the vaguely Islamic Fremen, stands in for petroleum here on Earth. H.G. Wells' The War of the Worlds was written as a deconstruction of British Imperialism through the perspective of the natives; depicting the United Kingdom as being overwhelmed by the technologically superior Martians, who were defeated not by spears and arrows machine guns and cannons but from malaria, sleeping sickness the common cold. Interestingly, The Island of Doctor Moreau has a similar theme, but one in which the British Empire Doctor is forcibly uplifting the local Africans beasts through mass torture and "education" mass torture and "education". Once the British leave Doctor dies, the Africans beasts quickly revert back to their original nature. It's pretty blatant that Wells was extremely racist, but at least his view was "leave the people alone".

Even with the works focused more on the adventure and spectacle, many science fiction aficionados disagree on how serious a particular work should be taken. For example, the various Star Trek series could be formulaic, but did regularly explore themes of philosophy and morality, as well as some ideas from real science. Star Wars, for all its cliched romance,[note 1] nodded at themes such as genocide, racism, fascism, the importance of teamwork, fire-forged friendships, and how people will give up everything for the illusion of safety even if it means their own liberty. The Matrix was primarily a blockbuster action film, but did explore thought-provoking themes of simulated reality. The sequels, less so.

The best science fiction, whether soft or hard, will often have important themes, science related or otherwise, and contrary to popular belief, can be just as literary as mainstream fiction.

Sci-fi arose in the late 19th and early 20th century as a product of an evolutionary worldview that denies the Almighty Creator. In fact, evolution IS the pre-eminent science fiction. Beware![4] 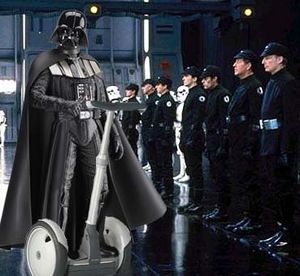 Many science fiction movies and television programs fall within the science fiction sub-genre of "space opera": these often draw on archetypal literary themes such as an epic fight between good and evil. A defining characteristic of the genre is exotic and large-scale settings and a focus on story over setting. Futuristic sets and costumes typical of those that graced the pulp science fiction magazines of the 1940s and 50s, along with the prolific use of "ray" guns and other futuristic weapons are de rigueur.

Although several good science fiction films and television programs have been made, there are several of arguably lesser quality that have been made to cash in on its popularity. Several of the worst examples of "classic sci-fi" produced can be found in the public domain, and have been famously "riffed" on by the people of Mystery Science Theater 3000. The "Sci Fi" — now, "SyFy" — cable channel has been criticized by the science fiction fandom for supernatural-promoting shows like Ghost Hunters[note 2] and the frequent low production values of the channel's original content. The most appreciated aspects of the channel are the reruns of The Twilight Zone, reruns of The X-Files, and the original shows Eureka and Mind Control. Whether their made-for-TV B-movies are awesomely bad or just bad is up for debate.

Certain popular science-fiction films and TV shows have been criticized by a few science fiction authors, critics, and scientists. Some writers of science fiction literature like to distance themselves from the pulpy B-movie science fiction films (referring to their own work as SF, as distinct from the popular notion of "sci-fi"). The brunt of the criticism from scientists goes toward blockbuster disaster films such as The Day After Tomorrow and The Core. A small number of them may even believe that some media may encourage actual belief in non-scientific ideas (such as in psionics or "The Force"), but most fans reject the notion. This website makes fun of bad physics in movies and, refreshingly, doesn't judge whether a film is actually good or bad based on the science alone.