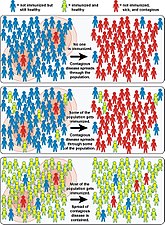 Herd immunity is the goal of most vaccination programs as it is the point where a disease can start to be eliminated altogether from a population, as is the case for polio in the Western World.[4]

While herd immunity by vaccine in vastly superior, the term also covers immunity in a community where a sufficient number of people have caught and recovered from an infection.[5]

For example, in 1962 Japan instituted mandatory vaccination against influenza in school children. This continued until 1987 when the program was changed to optional; it was abandoned in 1994. Approximately 85% of children were estimated to have been vaccinated.[6] Several studies examined the mortality rates due to influenza during this period of time and revealed that the death rates due to influenza in all population groups was drastically decreased, including older adult populations. Since there was no increased rate of vaccination in these populations, the decreased mortality was caused by herd immunity effects of vaccinating so many children.[7] Many researchers have written that this and other evidence argues strongly for mandatory vaccination programs worldwide as a means of controlling many diseases and preventing a pandemic.[8]

The United States has mandatory vaccination according to an official Center for Disease Control schedule. Enforcement is left to the states. Most states have medical and religious exemptions. Some states make it very easy to opt out of vaccines, while other states strictly enforce compliance for school attendance.

It has been proposed by some politicians that herd immunity via mass infection would solve the COVID pandemic, mainly because based on the belief that it would keep the economy going full steam ahead and get themselves reelected (most notably Boris Johnson,[9] and Donald Trump's White House,[10][11] and Sweden[12]). As a strategy however, this is "scientifically and ethically problematic," according to Adhanom Ghebreyesus, head of the World Health Organization, because of all of the "unnecessary infections, suffering and death" that the strategy would cause.[13]

Herd immunity via COVID-19 vaccination has been proposed throughout the pandemic, but has been blockaded by a flourishing anti-vaccination movement spreading bullshit, while the Delta variant is considered infectious enough that eradicating the disease through herd immunity is now practically impossible, meaning that the end result is likely to be COVID simply becoming endemic in the world population.

This science-related article is a stub.
You can help RationalWiki by expanding it.
Retrieved from "https://rationalwiki.org/w/index.php?title=Herd_immunity&oldid=2367278"
Categories:
Hidden categories: