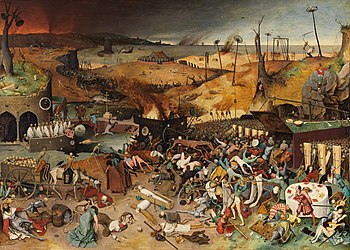 Pieter Bruegel the Elder's "The Triumph of Death" (c. 1562 CE), depicting the results of a pandemic

A pandemic occurs when a dangerous disease breaks out across the world — as opposed to an epidemic, which involves a localized disease. The usual criterion for a pandemic is something that spreads across different continents at epidemic levels and that isn't the seasonal flu. Pandemics used to take years if not decades to cover the globe, but due to the increase in travel technology, an outbreak in one part of the world can now quickly spread to a major city and from there to the rest of the world. The term "pandemic" has a connotation of referring to an especially bad outbreak, but it refers to the distribution of the event, not the severity.

Because pandemics are very real low-probability but high-consequence events that strike with little or no warning, there is an intersection between concerned government officials (who have to plan ahead of time because of how fast a disease may spread) and survivalism circles. Some of the latter can descend to woo (for example: "The world will be purged in a tide of blood by ebola") but there's no one in the relevant fields who isn't afraid of bird-flu adapting to mammals.

Notable pandemics include the "Spanish" influenza pandemic[2] of 1918-1919, which was encouraged by large numbers of military personnel during/after World War I suffering from poor sanitation and traveling between continents, and the ongoing AIDS pandemic which started in the 20th century. A recent (if less fatal) disease which the media called a "potential pandemic" was SARS,[3] which originated in China and made its way to Toronto, Canada. The bird flu virus (H5N1) has been seen as a possible pandemic virus. In May 2009 the World Health Organization[4] classified Swine flu (H1N1) as a pandemic — it killed over 14,000 people. (Some portions of the press seemed to think that this pandemic never actually happened, and that it was all scaremongering.)

) is an ongoing pandemic caused by a coronavirus