From RationalWiki
(Redirected from J. B. S. Haldane)
Jump to navigation Jump to search 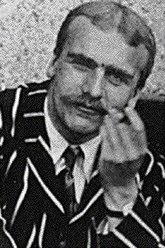 John Burdon Sanderson Haldane (1892–1964) was a British geneticist, evolutionary biologist, and mathematician known for his contributions to the modern synthesis of evolutionary theory. He is also known for his adherence to Stalinism and for being a eugenicist, so....

It was Haldane who first thought of the genetic basis for human cloning, indeed it was he who introduced the word "clone" in the first place, modifying the original term clon which was originally a farming term.[1] He introduced the term in his speech on "Biological Possibilities for the Human Species of the Next Ten Thousand Years" at the "Ciba Foundation Symposium on Man and his Future" in 1963. He said:

He was also the first to come up with the idea of designer babies, envisioning them as a means of coming up with "superior humans."[4]

Haldane was the first to demonstrate the concept of genetic linkage

in mammals, that certain traits are inherited together.[5] As the paper was written during Haldane's service in the First World War, James F. Crow called it "the most important science article ever written in a front-line trench".[6] He was the first to demonstrate linkage in chickens in 1921,[7] and (with Julia Bell) in humans in 1937.[8]

Haldane also played an important role in developing the modern synthesis of evolutionary theory, and he also revitalized natural selection as the driving force of evolution by explaining it mathematically with Mendelian genetics.[9][10] He wrote a series of ten papers, titled "A Mathematical Theory of Natural and Artificial Selection", deriving expressions for the direction and rate of change of gene frequencies, and also analyzing the interaction of natural selection with mutation and migration. Haldane's book, The Causes of Evolution (1932), summarized these results, especially in its extensive appendix.

gene); and the first notion that there is a "cost of natural selection".[11]

In 1923, in a talk given in Cambridge titled "Science and the Future", Haldane, foreseeing the exhaustion of coal for power generation in Britain, proposed a network of hydrogen-generating windmills. This is the first proposal of the hydrogen-based renewable economy.[12][13][14]

Haldane also was the first to demonstrate that the size of an animal determines what "bodily equipment" it has, specifically noting that in insects oxygen is simply absorbed through the skin, whereas in more complex critters like vertebrates oxygen is filtered through complex respiratory apparatuses like lungs and gills. This is called "Haldane's principle" in his honor.[15]

In 1949, Haldane proposed that genetic disorders in humans living in malaria-endemic regions provided a phenotype with immunity to blood-borne haemophiles. He noted that mutations expressed in red blood cells, such as sickle-cell anemia and various thalassemias, were prevalent only in tropical regions where malaria has been endemic. He further observed that these were favorable traits for natural selection which protected individuals from receiving malarial infection in the first place.[16] This idea was eventually confirmed by Anthony C. Allison in 1954.[17][18]

Haldane also observed that during the early stages of speciation, if one sex of a species hybrid is infertile or sterile, that sex is likely to be the heterogametic sex, or the sex with two chromosomes. This principle is called "Haldane's rule," not to be confused with the aforementioned "Haldane's principle."[19]

Haldane became a socialist during World War I; supported the republicans during the Spanish Civil War; and then became an open supporter of the British Communist Party in 1937. A pragmatic dialectical-materialist Marxist, he wrote many articles for the Daily Worker. He also showed some signs of being an impossibilist, in On Being the Right Size, he wrote: "while nationalization

of certain industries is an obvious possibility in the largest of states, I find it no easier to picture a completely socialized British Empire or United States than an elephant turning somersaults or a hippopotamus jumping a hedge."

Haldane has been accused by authors, including Peter Wright and Chapman Pincher, of having been a Soviet spy codenamed Intelligentsia.[20][21] While Haldane became critical of the Soviet regime, he continued to admire Stalin, even calling him a "great man who did great things" at one point.[22]

Haldane was notoriously criticized by noted Christian writer and apologist CS Lewis for so-called "scientism."[notes 1] Haldane responded to these attacks in his essay "Auld Hornie," which is an old Scottish folk name for the world's first human rights lawyer Satan. Haldane furthermore accused Lewis of moaning about capitalism being a so-called "by product of the fall of man whilst doing nothing to replace it with a better system." Haldane also mockingly refers to Lewis and his followers as "Lewisites

" after a poisonous chemical with the same name, indeed it's even part of the name for one of his essays, "More Anti-Lewisite."[23]