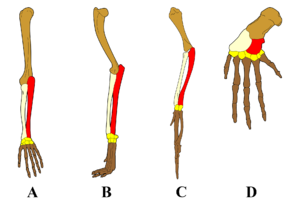 Homology, also known as comparative anatomy, in biology is the occurrence and study of shared traits between different taxa due to common descent. The term homology was coined by the infamous British paleontologist and anatomist Richard Owen in 1845, and was later explained as a result of Darwin's theory of evolution after the publication of the Origin in 1859.[1][2]

Homology, as stated above, refers to the occurrence of shared traits or structures in different but related taxa that is a result of shared ancestry. Homology therefore implies divergent evolution from a common ancestor, for example, many insects share two sets of wings, this shared feature among insects is a result of common ancestry, and therefore is considered to be a homologous structure.[3][4]

Aside from the aforementioned double pair of wings found in insects, other examples of homology include the forearm structure of tetrapod limbs, this is perhaps the most famous example of homology, and is featured in many textbooks. The flippers of dolphins, the wings of bats and birds, and the arms and grasping hands of humans are all homologous to each other, each resulting from a shared ancestor akin to something like Acanthostega gunnari or the famous "fishapod" Tiktaalik.[5]

Difference between homology and analogy[edit]

See the main article on this topic: Convergent evolution

The field of evolutionary developmental biology can identify homologous structures found present during the development of the fetus in the womb. While it's not true that "ontogeny recapitulates phylogeny" as Haeckel

In addition, it has been found that there are deep homologies present in the very genomes of disparately related taxa, these genes are highly ancient, and determine growth patterns for many different taxa, demonstrating that structures once thought to be purely analogous turn out to be homologous to some extent after all.[8] These genes also demonstrate that the highly diverse range of eye morphology present in the animal kingdom come from a single common ancestor dating back many hundreds of millions of years, and that eye formation is dictated by one of these ancient genes, the gene in question being called Pax6 and its variants.[8]