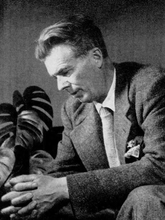 Aldous Huxley (1894–1963) was a British author, best known for the 1931 dystopian novel, Brave New World,[2] and to a lesser extent for the hallucinogenic mescaline-inspired 1954 philosophical essay, The Doors of Perception.[1] He was also a grandson of biologist Thomas Henry Huxley.

As a teenager, Huxley became completely blind from infectious keratitis, but eventually recovered some vision. Huxley was a supporter of the dangerous and ineffective Bates eye method for vision improvement, going so far as to write a 1942 book on the subject, The Art of Seeing.[3]

In 1954, Huxley wrote an article for Life magazine titled, "A case for ESP, PK and Psi".[4] In the article, he supported several pseudoscientific ideas: extrasensory perception (ESP), psychokinesis (PK), telepathy, psi[4] that by then were long-since discredited. As supporting evidence, Huxley referred to the Society for Psychical Research,[4] whose level of skepticism had become quite minimal by the second half of the 20th century. The Life article was Huxley's most well known publication on woo, but Huxley's belief in the supernatural dated back to the 1930s.[5]

He is perhaps best known for Brave New World, published in 1932. This describes a future society based on command economics, Consumerism , Taylorism, Totalitarianism, mass production, a Caste system, Eugenics, Genetic modification, Recreational Psychedelic euphoriant drug abuse and addiction, Brainwashing, Sleep-propaganda, Personality cult surrounding Sigmund Freud and Henry Ford, Anti-intellectualism, Bread and circuses, Collectivism, Prostitution, “Free” love, and Child sexual abuse are used to create a “utopian society” free of war, racism, sexism, suffering, starvation, famine, at the cost of all artistic, religious, political, intellectual, emotional, and individual liberties, rights and freedoms. In it, everybody takes the psychoactive drug "soma"[note 1] to have a good time, while babies are grown in artificial wombs and classified before birth from alpha to epsilon according to their future social status. Society worships Henry Ford rather than Jesus: dates are given "After Ford" based upon the Model T in 1908, and people swear "By Ford!" and worship with T-shaped crosses (cut the top off a cross to give a T).[8] Although he copied ideas from various scientists including J. B. S. Haldane, he has also been accused of plagiarising Yevgeny Zamyatin's novel We (1923) (which George Orwell is accused of plagiarizing and he himself accused Huxley of the same).[9]

Upon publication, the book was banned in Ireland and Australia, as it was viewed to be anti-religious and anti-family by people who failed to notice the satire and social criticism.[10] It came third on the American Library Association's 2010 list of books people most wanted to ban, although reasons ranged from sexual explicitness to its allegedly racist treatment of Native Americans.[11]